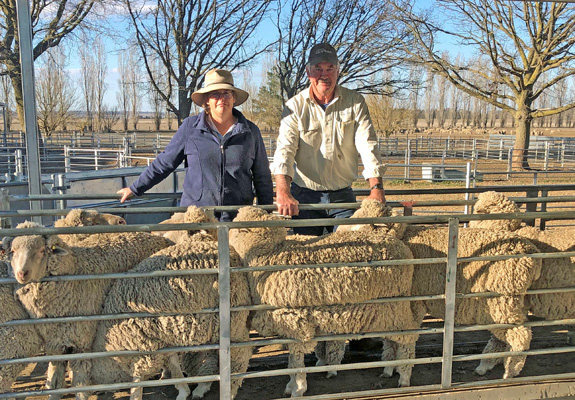 WHEN weighing up the option of having one income stream versus two, it just makes good business sense to go with the latter.

That is just one of many reasons why livestock consultant Andrew Calvert is passionate about Merinos – the true dual-purpose nature of the breed.

Andrew is a livestock consultant and sheep classer across four states, including his home State of Tasmania, New South Wales, Victoria, South Australia and further abroad to New Zealand.

He currently works with 15 Merino studs and about 30 commercial producers, some of which have been with him for more than 30 years.

Andrew is also a highly regarded Merino judge, lending his expertise to judge up to six competitions across the country each year, as well as being a professional classer for the New England Merino Lifetime Project (MLP) sire evaluation scheme.

His family has a rich history of involvement with the wool industry, seven generations strong, with two of Andrew’s sons running their own successful wool brokerage business.

Born and bred in Tasmania, Andrew’s own farming career began in a commercial Polwarth operation.

When he realised that Merinos were a much more profitable breed, he switched, firstly to commercial Merino production, during which time he won the inaugural Tasmanian Wool Flock of the year award.

The opportunity then arose to move into a stud breeding enterprise, which Andrew did successfully from 1986-2010, establishing two prestigious Merino studs before he moved to full-time classing and livestock consultation.

“I love sheep and I think Merinos are a wonderful breed, they are so versatile, and you can breed them to suit so many different environments,” Andrew said.

“I’ve been fortunate enough to travel to Argentina including Patagonia, Uruguay, South Africa and New Zealand looking at Merino operations over the years and they are some of the most extreme environments for sheep, yet the Merinos can cope.

“Commercially, they stack up very well.”

For Andrew, selecting the ideal Merino all begins with structure; as he believes the fundamentals are critical to productivity.

“If you build a house, you put down the foundations before anything else and I take the same approach to my classing,” he said.

“I’m very focused on the fundamentals, sheep have to be able to function, walk, convert and I’m also looking at productivity. I want to be able to breed a sheep that can maximise productivity in its given environment, and it’s really important to assess that.”

Subsequently, he takes time to evaluate the environment of his client and their livestock before sitting down to work out a breeding program, which is generally done in three to five-year blocks, focusing on breeding a Merino that is true to type and relevant to the market.

He said at the crux of each program was the main profit drivers, including fertility and wool cut to micron.

“If you focus on those, you will inevitably end up with a profitable animal,” Andrew said.

“As Merinos have become plainer in body, we have seen an improvement in fertility, we’re breeding a more modern sheep.

“I’ve got clients that last year sold a line of cull one-year old ewes for $330/head, and others selling whether lambs for upward of $200/head before they’ve even cut their two teeth- that’s good money and with prices like that, you can’t ignore the importance of fertility.”

Wool-wise, Andrew favours white, ‘waterproof’ wool with good handle and nourishment, traits which he believes are essential in achieving the desired average micron.

He said selecting for good skin and structure to produce a dust-proof wool is also vital.

He urges clients not to become fixated on statistics, as he believes visual inspection is the most valuable tool available.

“There are so many facts and figures associated with livestock these days, it’s easy to become obsessed with them but actually look at the sheep, they are the real proof,” he said.

“To me, the only figures that matter are the ones in the bank statement. Keep focused on productivity and filling bales, the rest will follow.”

There have been numerous career highlights for Andrew to-date, which on a personal level include being a Stud Merino Breeders Association of Tasmania (SMBAT) honorary life member, an Honours Life Member for the Midland Agricultural Association (MAA), winning National Merino pair twice, winning the Lionel Weatherly trophy three times and holding the current Tasmanian price record for Merino sold by auction (achieving $30,000 twice).

“That’s very satisfying, seeing them do well and knowing your part of the team – and it is very much a team effort,” he said.

“I love what I do, it can be physically and mentally demanding, but on the flipside, so rewarding.

“I find just as much enjoyment seeing my smaller commercial clients succeed as I do from my stud clients. I’ve literally had producers ready to toss it all in when we’ve first sat down, then seen them turn it around and land a contract for 90 bales of wool to Italy well above market price.”

With both wool and meat prices reaching record levels, Andrew believes the true value of the Merino to be evident now more than ever.

He said with that came the opportunity to inspire the next generation to become involved in such a promising industry.

“I have some clients that are focused on benchmarking their various operations and the advice they are getting is to reduce breeding cow numbers, increase breeding ewes and where country allows, run a wether flock,” he said.

“To me, the Merino provides more options compared to a straight composite-types operation.

“We need to be mindful of ewe numbers when meat prices are this good, but I’ve never seen more opportunity in agriculture in my lifetime than there is right now, and we need to encourage young people to be part of that.”