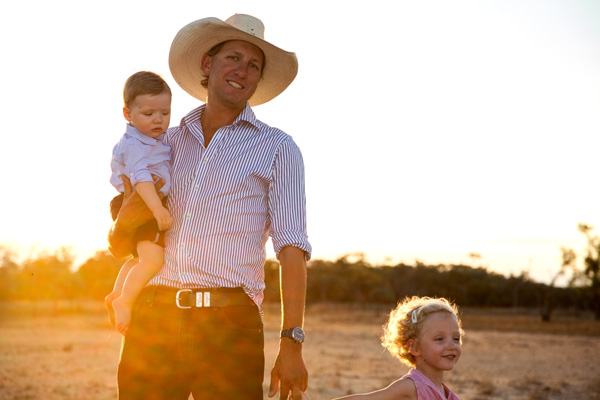 1. Wool is a huge drawcard, best natural fibre in the world.

2. Perfectly suited to our country and our particular environment.

3. Got to love what you’re doing and we love running profitable Merino sheep.

WESTERN Queensland grazier Ben Banks has long known the value of a Merino ewe. So much so, that even throughout the last 20 years of unpredictable and extreme weather patterns of northern Australia, Ben and his family have done everything within their power to hold onto their core breeding ewes.

If that meant agisting them to far flung areas of other states, or installing 75 kilometres of dog-proof fence using their own funds, the Banks family did it.

They have strived to continuously breed Merino ewes on their 40,500 hectare Blackall property since the 1940s, representing precisely the type of Merino operation required to maintain and boost Australia’s ewe flock, the primary focus of the Australian Association of Stud Merino Breeder’s (AASMB) latest Breed More Merino Ewes campaign.

The campaign aims to highlight the exceptional profitability and performance of the Merino across three key areas – best natural fibre, great tasting meat and the most profitable breed – to encourage producers to increase their ewe numbers.

It is those three specific components of wool, meat and dual-purpose profit that Ben Banks says makes his Merino operation both challenging and extremely rewarding.

“I used to want to be a cattle man, but Merino sheep are a bigger challenge, in the best kind of way,” Ben said.

“With both cattle and sheep, you’re looking to breed animals with great constitution and the conformation to survive in our environment, but Merinos have that added benefit of breeding good wool too.

“We are always looking for ways to expand our Merino operation and grow our numbers, but seasonally it’s not been as consistent as we would like.

“The seasons over the last 20 years have been horrific.

“We’ve experienced the three driest years on record, as well as the wettest year on record, and such extremes are exasperating.

“But despite that, we have managed to hang onto our core breeding ewes one way or another.”

The Banks family remain a true family operation, with Ben, wife Oona and their two children Zara (3.5yo) and Wally (1), farming together with Ben’s parents Jack and Rhonda, in addition to his sister Megan and husband Dominic Mohr, and their one-year-old daughter Ella.

There are four different properties grazed as one by the Banks clan, spanning 40,500 hectares of prime sheep breeding country near Blackall, Western Queensland, with the potential to run more than 20,000 Merino sheep fully stocked.

At their height in 2013, the Banks’ had shorn 22,500 sheep and ran 3000 head of branded cattle, but less than two years later, severe drought had forced every single animal off the place by early 2015.

“We saved as many breeding ewes as we could, about 5000 of them, and sent them all around Australia on agistment just so we could hold onto our own genetics,” Ben said. “The following year we leased a property at Inverell, New South Wales, and have been sending our surplus sheep there over the past two tough years.

“We rely on summer rain up here and this year were staring down the barrel of our sixth failed summer in a row, so we sold all of our Inverell stock.

“Nine days later, we had 127mm of rainfall, followed by another 50mm a fortnight later.

“We don’t need a lot of rain up here, it just needs to be timed well.”

Those two saving grace rain events meant the Banks’ remaining 14,000 Merinos, including 6000 scanned breeding ewes, 2000 wethers and dry or maiden ewes, could stay right where they were, with plenty of grass on offer.

Based on current sheep values and wool prices, Ben estimates their Merino ewes generate $20 profit per ewe, and $30 profit per hectare for their business.

As a direct result of these favourable prices, profitability and timely rain, Ben said they purchased another 2500 Merino breeders from NSW earlier this year, where the current dry season presented the Banks family with the opportunity to purchase large lines of quality sheep.

If the seasons continue to be favourable in Ben’s home patch, he hopes to get back to their full ewe breeding capacity by 2020. Working as a qualified sheep scanner for the past 10 years has also been beneficial for Ben to recognise the importance of ewe fertility and breeding viability.

Every ewe in the Banks family’s flock is pregnancy scanned, electronically tagged and separated into single and twin mobs at the beginning of January.

Having previously been spring lambers, Ben has re-worked their breeding schedule to start lambing in early March, after joining occurs over a six week period in early October.

The Banks family’s shearing schedule has also been adjusted and they are currently shearing every ten months to shift it from May to late August/early September.

This coincides with the new joining period, giving the ewes a month off the board to improve their condition before joining in October. In an average to good year, the Banks’ Merino flock produces an average of 5kg of wool from mature sheep, 2.5kg from lambs and filling anywhere between 4-500 bales per year.

Based on current wool values, this brings a gross of $60 per head on 10 month shearing. Traditionally, they produce wool around 18-19 micron, but the recent droughts have caused Ben to adjust that also.

“Following the recent dry years, we have had to buy in so many different genetics that has prompted us to do some corrective mating, with the aim of breeding a 20-21 micron ewe,” he said. “I want to straighten all that out by breeding more Merino ewes with a consistent wool type.”

It wasn’t only the Banks family who came close to losing their Merino flock two years ago, as the devastating combination of drought and wild dogs was taking a widespread toll on all Western Queensland sheep producers.

In 2015, Ben and his family made the decision to protect their sheep by spending almost $400,000 of their own funds to install 75km of wild dog-proof fences along their property, and since then other producers and the government have joined the fight, establishing over 1000km of fences.

In the initial lambing periods since the fence was completed in mid 2016, Ben has seen a huge increase in lamb survival, with a minimum of 10pc increase attributed to less predator deaths.

They have marked 4000 lambs already this year, and with this minimum increase of 10pc, or 400 lambs, working on current values of approximately $75 per head, the fence attributes an instant $60,000 additional return.

It’s the first proper lamb marking the Banks family have had in six years, with another 3000 lambs to be marked, out of imported ewe lines that lambed later in the season. Ben believes the fence has become a lifeline for livestock producers in their area, with the benefits immediately evident, and he hopes it only continues to grow and strengthen local flock numbers.

“We would be out of sheep by now if we hadn’t put our fence up, it’s as simple as that,” he said.

“The wild dog problem was so bad it was all anyone could talk about for a couple of years. “But now with the help of government funding for the fences, there’s been an immediate shift.

“It’s been a game changer for the sheep industry here, only two years ago sheep were almost extinct in Western Queensland due to drought and dogs.

“But now, after travelling around with my scanning business, I have seen an instant improvement, with more sheep flowing back into Western Queensland.

“Our sheep are happy and content again without a fear of dogs, and now with a bit of grass and water around, all things are pointing towards a positive outlook for our Merino flock.”