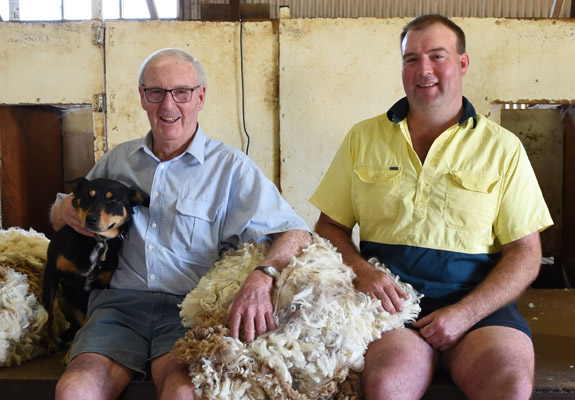 Designated weaning paddocks, culling of dry ewes, feed lotting, supplementary feeding and genetic selection are some of the tools utilised by Mid North SA farmers Bob and Stephen Tohl to maximise productivity of their Merino enterprise.

The father and son team own and lease 4000 ha at Booborowie and Spalding, sowing 2800 ha to cereals, legumes and canola, as well as running 6000 Merinos.
Bob and Stephen’s sheep management focuses on boosting lambing percentages and wool production.

“If we can produce more wool and grow more lambs that’s where the profit is,” Stephen said.

“The extra effort and expense we put into supplementary feeding and other management strategies has helped increase our lambing percentages from the low 90s to consistently around 110 pc.

“And our wool cut has lifted from below 7 kg to above 7.5 kg clean fleece weight.”

Juggling feed requirements is a constant dilemma for Bob and Stephen, as is the case for most mixed cropping and livestock producers across much of Australia’s inside country.

A strategic supplementary feeding program is integral to the Tohl’s management regime and starts prior to mating their 2500 to 3000 Merino ewes in mid-November.

“Rams have access to lupins in self-feeders for six weeks before joining with ewes,” Stephen said

“Ewes are trail fed lupins three week before they are joined with the rams and for three weeks after.

“We learned this from Professor Alan Bell around 15 years ago and we haven’t looked back.

“Having our stock in good nick for mating has really improved fertility and lambing percentages.”

Rams (run at 2.5 to 3 pc) are left in for eight weeks and all ewes are scanned 40 days after rams are taken out.

“Dry maiden ewes are tagged and given a second chance to breed the following year,” Stephen said.

“Older dry ewes are removed from the flock, are shorn and are generally sold over the hooks.

“Our feed supplies are always tight, so it’s about getting the best value out of the feed we do have by concentrating our efforts on the ewes that are productive.”

The Tohls aim to keep their ewes in score condition 3 through to lambing in May/June utilizing stubbles, plus feeding out grain and hay in late summer and autumn when paddock feed is short.

Grain and hay feeding enable body weight to be maintained through the times of low feed, even though lambing ewes and ewe hoggets are run at high stocking rates (4-5 ewes per hectare).

Stephen said they have trialled splitting twinning ewes in the past, especially with maiden ewes.

However, they find running smaller mobs isn’t the best option on their property, which comprises large paddocks for ease of cropping and are more ideally set up for mobs of 300 ewes.

Ewes are vaccinated with 3 in 1 and Eryvac at crutching time prior to lambing.

Lambs are marked and mulesed using pain relief and vaccinated with 6 in 1 and Eryvac.

Lambs are weaned at the end of July into designated weaning paddocks, sown to a pasture mix of vetch, oats and Arrowleaf clover.

“This provides solid feed for the lambs through winter and gives our ewes a chance to freshen up for a month or so before shearing,” Bob said.

These sown pastures are spray topped in late spring and cut for hay for use in the feedlot over summer.

The Tohls take great care with preparation of their wool clip, which has been acknowledged with three Clip of the Sale awards in the past seven years.

Wool cut is a high priority for Bob and Stephen and starts with ram selection.

“We also select rams with bright white waxy wool to keep the dust out and looks for good nourishment.”

Rams are shorn twice a year – in October (prior to mating) and in March (to keep wool short for ease of management).

Stephen said they tend to prefer Poll Merinos for easier management for themselves and their shearers.

“But we will still buy horned rams if their wool and meat traits are strong and trim back the horns to a manageable level,” Stephen said.

Wool cut is a priority in classing of their 1.5-year-old ewes.

Between 35 pc to 40 pc of this age group is classed out, shorn, and sold to repeat local buyers for crossbred lamb production.

Both Bob and Stephen spent many years shearing off-farm which they both say gave them a great feel for wool cut and which were the best sheep to shear.
The Tohl family’s lambs are shorn in the second week of October and cut just over 2 kg (clean fleece weight).

After shearing, lambs are run in vetch and oats feed paddocks until barley stubbles become available.

The wether lambs remain on stubbles until mid-January, when decisions are made about reducing numbers to a manageable size, depending on the season.

Generally, around 400 wether lambs are drafted off and sold through the Jamestown Sheep Market. In recent years price range has been $120 to $130/head.

Of the remaining wethers, the lightest stay on stubble feed, and the rest go into the Tohl’s feedlot, after grain induction with self-feeders in the stubble paddocks.

They are sold in batches to Dublin saleyards or on hooks as they achieve their target weight, which is generally 21-25 kg.

Following drought conditions last year, the Tohls are planning to sell their wether lambs at 18-20kg.

“With grain prices so high, our wether lambs won’t be in the feedlot long this year – we will aim to get them to weight as quick as possible and quit them,” Stephen said.
Lambs still on-farm in March are shorn, generally cutting around 3 kg clean fleece weight.

Ewe hoggets are moved into a feedlot in winter and fed barley and oaten hay to help maintain their condition and growth during Booborowie’s cold wet winters.

Older ewes running on the stubbles are given a loose mix of 65 pc Stock lime, 30 pc salt and 5pc magnesium.

The feedlot also provides a back-up feed option in seasons with a later break, enabling the Tohl’s pastured hills to get going (with help from fertilizer and clover spreading).

“The potential is there for big returns from cropping, but the outlay these days is massive,” Bob said.

“The input costs are not there for livestock as they are for cropping.”

“Livestock are not affected nearly as much as cropping with a poor rainfall year or frost.

“We can still maintain an income from livestock by supplementary feeding.”

And while the past season has been very dry with regular frosts, the fifth and sixth generation producers continue to look forward to the future of the mixed farming enterprise.

Bob and Stephen share a passion for improving their flock to boost profits.

“The reward is in seeing improvements you make to the flock through the life cycle of the sheep,” Stephen said.

“Lambs are with you for five and a half years, so you have time to really see the difference that your management makes on the production of that sheep.”