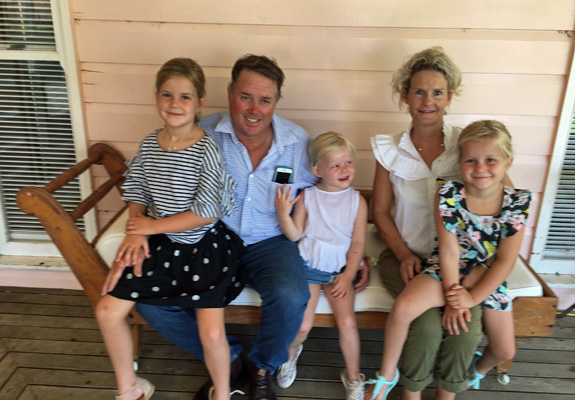 BETWEEN dogs and drought, sheep numbers really took a hit at ‘Weewondilla’, north of Longreach, Queensland.

Things are now starting to turn around for the Webb family as they rebuild their Merino operation.

The Boyds run some cattle and goats but with profitability in mind, have put Merinos back at the forefront of the business, made possible with the installation of 140km of exclusion fencing.

“We’ve always had Merinos on the property in some form, we have dabbled with other breeds but always gone back to Merinos,” Boyd said.

“It’s a win-win with Merinos, you’ve got the wool for fibre and the meat to eat.”

In 2012, sheep numbers at Weewondilla had reduced to 12,000 head and an influx of dogs forced numbers down further to 7000 head.

“We’re slowly rebuilding and at the moment I’m trying to make sure I’ve got as many ewes around me as possible,” he said.

“I think going forward there will be a lot of people that go back to sheep now we have exclusion fencing, the last few dry years have shown that cattle are not well-suited to our business.

“Exclusion fencing has given us the biggest lift. It makes a huge difference, for dogs as well as allowing us to get control over our pastures.

“It took us 18 months to pay for the first 70km, factoring in the price of sheep with the drop in our mortality and increase in our lambing. It’s a big cost, but there’s no way we could have the turnover we’ve had in the last three years if we were still trying to run cows.”

A typical season for the Webbs sees joining in late October/early November, lamb marking in April/May, crutching in March, shearing and weaning in July/August and lamb marking again in June.

They also have a spring lambing mob, joining in March for a late August lambing, which are marked in October.

Boyd said that method allowed them to get more value from their rams, which form part of a contract breeding program.

“It also gives us the opportunity to give ewes that miss the first lambing to fall into that second cycle and come through, however I am hoping to get back to one joining for an autumn lambing in the future,” he said.

Though conditions at Weewondilla have been tough since 2012, Boyd said they had learned many lessons which would be implemented going forward.

They invested in a feed mixer to help sheep through at opportune times, which can produce feedlot rations down to a feed lick and plan on increasing their on-property grain/pulse storage from 100 tonnes to 600t.

Drought/confinement pens will be used to help minimise the pressure on pastures during tough seasons.

“Droughts creep up on you, but you need to be prepared where you can,” Boyd said.

“Last year, we were able to turn off some lambs on grass and hopefully with improved pastures we’ll be able to do that again but having the ability to supplementary feed we hope will allow us more flexibility.

“ASBVs are also a big part of what we’re looking at now. Going forward, our Merino genetics is something that we’ll be focusing on a lot more.

“I’d like to be breeding a plain-bodied ewe that has that 18.5-19.5 micron cutting about 6kg and bringing a lamb to the yard every year, early-maturing with good fat, easy care and go do-ability.

“That’s why we’re aiming to fit all the sheep with electronic tags so we know which ones are most productive and profitable, and that’s how we should be looking at our business.

“For me, it’s going to come down to fleece value and hopefully we’ll get to the stage where instead of culling on age or just selling a year drop when it gets dry, we’ll be able to start retaining our higher performing sheep.”

Nutrition is a big challenge for the Webbs and it’s a tool that Boyd wants to harness to increase their lambing percentages, which decreased due to the dry conditions and impact from dogs.

Currently lambing percentages sit around 65pc, but he is confident they will return to the 85-90pc averages they have achieved in the past.

“When the dogs were at their worst it was a pretty ordinary time, lambing percentages were at 22pc and our mortality was at 28pc, but we’ve been able to get that back down to 7pc since the exclusion fencing and we’re aiming to do even better,” Boyd said.

“With that, going forward I think we can be a bit smarter and keep our ewes in better condition.

“We’re in a rebuilding stage but it’s a process and it takes time.”

Describing their operation as generally low-cost, low-input sheep production, Boyd said while feed was costly, with current market prices it was a justifiable expense if it was cost-effective.

They prefer pulses and cotton seed in supplementary feeding and rely on natural pastures which are predominately Mitchell, Buffell and Flinders grasses.

While selling sheep has been more of a best-market-opportunity approach of late, Boyd said ideally they would like to have more regular and consistent markets for their annual turn-off.

“Whatever we do in the future, Merinos will be play a major part,” he said.

“In the past, healthy and diverse towns and communities have always been supported by a strong sheep and wool industry.

“A vibrant sheep and wool industry provide plenty of employment opportunities and stronger towns and businesses.

“Right now, like everyone else, we need it to rain and get back to some sort of consistency, let our pastures recover and hopefully, next time we run into a dry stint it won’t be as tough because we’re better placed to deal with it.”

The annual wool clip has reduced in size, but they are hoping to get back to normal production levels in coming years.

The Webbs have contracts in place for their certified non-mulesed wool and see an opportunity to develop direct relationships with end users.

“I think there’s a better way to sell wool other than the traditional auction system, to iron out some of the peaks and troughs,” Boyd said.

“Merino wool is a sustainable, clean product and should tick a lot of ethical and environmental boxes for people, I think there are still many opportunities for the demand to grow worldwide.”