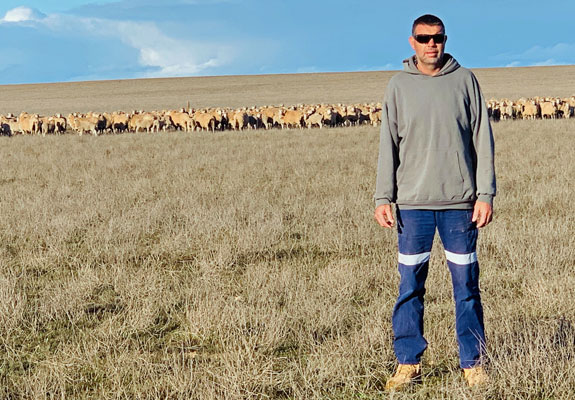 A BACKGROUND in shearing has made third generation Charra farmer Craig Wright quite particular about his wool quality.

Craig, his wife Naomi and their four children, Taylah (15), Cohen (12), Myles (7) and Fletcher (3) farm a cropping and livestock operation, ‘The Gums’, at Charra, west of Ceduna.

Craig’s father, Garry, still lends a hand on the farm, which involves a 2024ha cropping program comprising of wheat and some oats, and the running of 2100 breeding ewes, 650 hoggets and 1750 lambs in a pure Merino flock.

Low rainfall and short seasons are just two of the challenges faced by the Wrights on their coastal property, but after four generations of farming they have come to know what works.

In sheep production, that’s a big-framed horn Merino with a nice free-growing bright fleece based on a 20-year dedication to sourcing top-quality South Australian genetics.

“We can finish Merinos well out here, they are robust and are graze pickers, they don’t waste energy feeding the entire day like some breeds do, so that energy is used for growing,” Craig said.

“We like horns because they are good-doers, they seem to be better-suited to our country and we get more out of them compared to polls.”

The Wrights turn off their wether lambs shortly after weaning at roughly 20kg, generally sold through local Dublin and Jamestown saleyards to producers or feedlots, with the cast-for-age ewes sold in the same way throughout the year, market-dependent.

Craig now shears the lambs prior to selling, as the current market has made it far more worthwhile to get that extra fleece and results in a more profitable animal.

Nutrition has become a priority for the Wrights over the last few years, in an effort to improve lambing percentages, overall growth and prolong paddock feed.

Six weeks prior to mating, both rams and ewes are fed a mix of oats and lupins (90-10) through self-feeders and kept in mobs of no more than 300 head.

“We do that to give them a boost of protein and get a bit of weight on the ewes and it has helped improve our lambing percentages as well as producing healthier lambs that grow faster,” he said.

“They can be a bit slower to grow out on this country, sometimes it can take an extra year before they are ready to breed, and nutrition definitely helps that process.”

Rams are joined at a rate of 1-100 towards the end of November for a May drop, which has been adjusted over the years to fit in with the annual shearing and utilise green feed.

Lambing percentages now sit at 85 per cent, which Craig is happy with but is also always striving to improve overall productivity.

“We were around the 70pc mark at one stage, so all the nutrition work we’ve done has definitely made a difference but I think there’s still some room for improvement,” he said.

On marking, lambs are given a 3 In 1 B12 Glanvac, followed by 6 In 1 Weanerguard, while ewes are treated with a 6 In 1 Eweguard at crutching, and hoggets are given a cobalt bullet.

All sheep are drenched after shearing and during the summer months, Beachport liquid is added to troughs for a mineral supplement.

Craig said water quality could also be a challenge and as such they kept their younger sheep on certain parts of the farm to avoid a higher salt content in the water.

“We’re on bore water out here and at one end of our farm it’s a lot saltier, so we’ll try and keep our younger sheep on the fresher water because the higher salt content stunts their growth and slows them up,” he said.

The annual shearing is done at the end of July, producing about 95 bales at an average of 20.5 micron and cut of 7-8kg/head.

Yield generally sits around 65-68pc, while the averages staple length is 100mm and vegetable matter of 1.5-3pc.

“We’ve bought the average down from 21-22 micron but we wouldn’t go any lower than that because we would lose body size and that doesn’t suit our country,” Craig said.

“We’ve also seen an improvement in the strength since we increased our feeding, especially in tougher parts of the year when feed starts to slip, you see what having that extra protein through the feeders does to the wool.”

The Wrights market their clip straight after shearing, fetching around the 1400c/kg mark last year which Craig was really pleased with.

Being a shearer prior to returning to the family farm has made him fussy about his wool and he culls accordingly, removing 30pc of hoggets factoring in wool length, colour and broadness before overall size and body.

“I do like my wool and I think being a shearer has made me fussy, I know what I like and what I don’t and there’s no point keeping sheep that don’t fit into that,” he said.

“I’m always trying to get more out of our sheep and the property in general, but in ways that are cost-effective and work for our country. That includes breeding Merinos because they are simply the most profitable breed for our business. They are well-suited to our land and we get an income from both the wool and the meat, and with prices the way they are – I think Merinos are the way forward.”