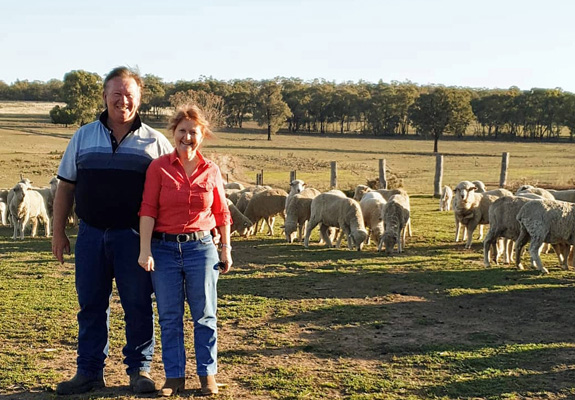 2. Well-suited to our environment

IT has been a tough few seasons for Manildra sheep producers David and Debbie Mullins, but if one thing has shone through, it’s the hardiness of the Merino.

Farming since 1988, the Mullins have been running Merinos since they started out, with numbers now sitting at over 2000 head.

They also crop 120ha of oats for feed.

“The Merino is such a versatile breed and we’re on light, sandy loamy country out here, so they are well-suited and do well,” David said.

A hairdresser by trade, when he’s not styling members of the community with the latest cut, David is working hard to refine the style of his own flock.

Their farm is a shared passion for he and Debbie, with the help of their four adult sons, Joel, Shawn, Jake and Kaleb.

While it’s not a full-time commitment for any of the family members, they each bring their strengths to the business and help whenever possible.

“It’s very much a team effort for us,” David said.

Wool quality is a key focus for the Mullins and it shows, with consistently strong demand for the family’s 16-18 average micron clip.

Last year, seven of their finest (17m) bales from a 65-bale clip achieved 2837 cents per kilogram clean, an impressive 164c/kg above market value at the time.

The top half of that clip yielded between 70-80 per cent, with vegetable matter of 0.4 and lower, with outstanding staple length.

Their lambs are shorn in October with a main annual shearing in March, and the clip is generally marketed soon afterwards.

This year’s clip totalled around 60 bales, with yield averaging between 60-70pc, maintaining that excellent length and low vegetable matter that had buyers in a bidding frenzy.

David attributes a key factor in their results to a focus on nutrition, which he believes not only sustains wool quality, but also keeps the sheep in a good score condition for joining.

They use their own oats and buy in additional barley, but also focus on improving existing clover and ryegrass pastures, recently spreading lime on some newly cleared areas on the farm.

They have also reduced stocking rates this year to see if it makes any difference to overall performance.

“Feeding has become a daily event, it’s just part of the routine now unfortunately,” he said.

“They’re mainly on barley and they receive a ration each day, that way I find they don’t guts themselves as much and they don’t get that big hit of protein, which can make them drop wool.

“We also put lick feeders in with the younger sheep.

“The Merino itself really stands up in these tough conditions though, it’s a tough breed.”

Joining takes place twice each year at a rate of two rams per 120 ewes, aiming for an autumn and spring lambing.

This year, they joined 1500 ewes, but the season impacted their lambing percentages, which normally sit an average of 90-95pc, pushing it down by about 35pc.

Lambs are vaccinated at marking with Weaner Guard and then six weeks later are given a booster shot.

To maintain the frame and wool traits they prefer, the Mullins cull heavily after shearing, removing any animal that doesn’t pass their visual inspection.

“We like a tallish body, with good structure around the rump to produce more wool, as well as a good, sound head and feet – we’re basically looking at the whole package,” he said.

Previously, the Mullins would annually turn off a line of Merino wethers (two-year-old) after shearing, but their numbers were higher after retaining some from the 2016/17/18 drops.

Having to regularly buy in feed, the situation proved unsustainable this year and over the last six months they have sold 800 wethers through the local saleyards.

“It’s a real shame and it was a tough decision, but we had no choice but to capitalise on meat prices,” David said.

“For our white tags we averaged around $120/head and topped at $148/head, which we were happy with.

“By holding on to them as long as we did, we did get a few fleeces off them which helped maintain our clip size and I guess that’s another beauty of the breed, you get those two income stream options.”

Looking to the future, David remains hopeful that the family can build numbers and continue to improve on what they have already achieved.

“We’re mindful of keeping our ewe numbers up, especially with so many people making the most of meat prices, it’s something that could be an issue going forward,” he said.

“Merinos will always play a major part in our farm business; I don’t believe any other breed could do as well as they do out here.”