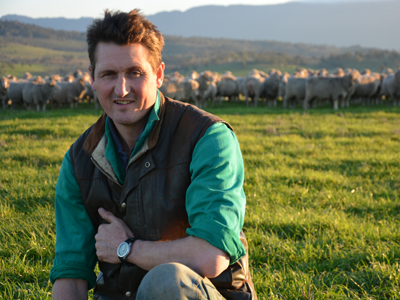 1 Profitability – Merinosgenerate an income of about $70/DSE for wool, which helps to drive business profitability

2 Performance – Merinos remain a consistent performer, especially on the back of improved prices for mutton and wool

Benchmarking data is proving that Merinos are the consistent financial performer in the farm business of Campbell Town, Tasmania, producers Dave and Jo Taylor.

Their property includes a 4750 Merino ewe flock as the backbone of their farming enterprise, as well as first-cross lambs, alkaloid poppies, season-dependent grazing wheats and small seed production. A Merino stud, DT Kenilworth, is also run, primarily for their own use. The business is run with Dave’s parents David and Tina and the family has farmed in the same district since the 1830s.

The Taylors have been part of a Holmes Sackett benchmarking group since the early 2000s with 18 other Tasmanian producers. The group compares the profitability of various enterprises, comparing their performance to national data.

Their most recent data showed Merinos generated an income of about $70/DSE for wool, compared with $60/DSE for prime lamb and $50/DSE for beef.

“Obviously, there are different cost structures and operating environments for these enterprises, but I think it demonstrates the ability of the Merino to generate income to drive a profitable business,” Dave said.

“Benchmarking data proves the Merino is a consistent performer, especially on the back of improved mutton and wool incomes. They’re a profitable animal and the backbone of the Australian sheep industry.”

The Taylors have held an on-property sheep sale since 2010 to sell crossbred lambs, ewe hoggets, surplus older ewes and wethers. This is usually in December with numbers ranging from 2800-3200, depending on the season. All sheep are sold off-shears.

Crossbred lambs are sold at 35-36 kilograms liveweight and average $75-$80/head. Dave says this is “easy money for four months work” and enables him to maximise the price he receives for lamb and mutton while capitalising on selling sheep with potential fleece value.

In the past few years Merino wether lambs have been kept on, pasture fed and sold in winter at nine to 10 months, with most recent results averaging 42.5kglw, dressing out at 40 percent, averaging 17.4kgdw at $5/kg carcaseweight, plus skin.

“The wether lambs were also shorn at about seven months and cut about $30 worth of wool,” Dave said. “This equates to about $120 per head revenue within 12 months of age for the wether lamb portion which is pretty handy money.”

Dave says there remains a perception in Tasmania that Merinos are not as hardy as crossbred ewes, but he dismisses this, saying it comes down to improved farm management. Their weaning percentage is about 100 percent.

“The crossbred lamb from a composite ewe has become an increasingly popular enterprise in recent years in Tasmania but I beg to differ. If you look closely at the margins, I believe the self-replacing Merino actually performs much better.

The Taylor’s flock has an average micron of 17.4 and is split with 3250 ewes mated back to Merinos, and 1500 mated to White Suffolks.

“In my opinion wool has consistently outperformed all other livestock enterprises,” Dave said. “Merinos are the focus here because they are profitable, and they also suit our land. We have varying soil types ranging from bush, open run country, rocky outcrops, and ground under centre pivot irrigation.”

Dave describes his flock as “all-purpose sheep”, with productive wools on a larger framed animal providing ease of lambing and flexibility with their mating options. Ewes generally average 63-65kg liveweight, larger than most flocks in the Tasmanian environment.

Ewes lamb from August 1 and all sheep are shorn in November, meaning they go into the summer bare shorn and have zero fly problems.

“The other benefit is without pre-lamb shearing in early winter we don’t drive the ewes to consume another 20pc more feed off shears, when typically, we don’t have this extra feed available,” Dave said. “The potential downside was that we were lambing in half wool, risking a potential break in the wool.  However, we have found in the past five years this has actually not been a problem at all.

“With an average rainfall of 475 millimetres we can have quite a short spring, and an early summer, so it’s important we utilise the surplus spring feed, you don’t make a profit if you have plenty of grass and fat sheep, you need to maximise productivity.”

“While this can get a little complicated when excluding cropping areas and non-productive areas of the farm it does allow a comparison across districts and rainfall patterns,” Dave said. “We continue to focus on wool productivity, and while our micron has been dropping it is not our primary selection criteria.”

“The current levels of the Australian wool market are very strong. As long as we keep a critical mass of the Merino wool to drive the wool production I think the wool industry has a positive future.”