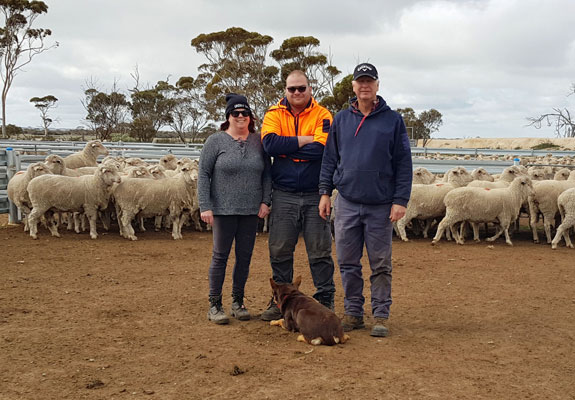 3. Wool production and associated benefits for the local community

MERINOS have always been a profitable option for Evan Wyatt, which is exactly why he and his family have chosen to stick with the breed in their livestock and cropping enterprise.

Evan and Jeni Wyatt, and their son, Patrik, farm at ‘Eastland’, Pingaring, over 3700 hectares, much of which has been farmed by the Wyatt family since 1923.

The family runs 1750 Merino breeders and crops a 2500ha program of wheat, barley, oats and lupins, as well as sowing Margurita French serradella and a Dalkieth/Nungarin clover mix for pasture.

Evan farmed with his brother, Dean, until 2014 when they amicably divided the property and livestock – giving him the choice of taking the straight Merino flock or continuing a crossbred operation using terminal sires.

“I chose Merinos because of their dual purpose and the fact they do well out here,” Evan said.

“That’s not to say that the crossbreds don’t, but Merinos have always been profitable for us, even when the wool market was down.

“I also think that the wool production is better for the community as a whole, it makes more work for local shearing teams, which means more people staying in our community.”

Last year the Wyatts chose to increase sheep numbers, as Evan said they believed there was less risk with running sheep compared to a higher ratio cropping operation.

“For us, there is less risk involved with grazing Merino sheep and growing clover versus growing a lupin or canola crop in the same paddock. Particularly with sheep and wool prices as they are, it’s a profitable rotation,” Evan said.

“We look at an average of $140/head for our wether lambs plus a 3.5kg clip at 1500c/kg, you’ve got an animal worth $200 – potentially even more now with the way prices are heading. It makes it worthwhile.”

While they opt for a lighter stocking rate at two sheep per hectare, increasing sheep numbers has proven to be a juggle during dry seasons and the Wyatts are now in their third season of lower-than-usual rainfall and lambing onto self-feeders.

They have always held back a silo full of barley for emergencies, but this year that went and they fell short, resulting in them having to truck in road train loads of hay, barley and lupins as well as carting water.

Staying on top of nutrition remains a priority in their sheep production, and the Wyatts use their self-feeders to feed a barley/lupin mix and a supplement Rabar pellet at 25kg/tonne of grain.

“It seems like a lot at the time but when you work it out it’s about $40 per head that we’ve spent on feeding our sheep, and with prices the way they are that’s not too bad,” Evan said.

“We’ve invested in a bagging machine for easier grain storage, as we don’t want to fall short of feed again.”

Rams and ewes are joined in January, at two per cent, for a June drop in the hopes they will be lambing onto green feed.

Evan said that routine had allowed them to maintain a lambing percentage of 100pc of ewes mated, although this year the season had seen that drop down to 88pc which they considered disappointing.

This year, they also trialled confinement feeding a mob of lambing ewes through their feedlot, set up on lick-feeders with a barley/lupin Raba mix, which proved high-maintenance but put the lambs in prime condition.

While they wouldn’t repeat the process every season, Evan said it was interesting to see the results.

“Working out the nutrient balance was tricky, but we were aiming at about 13 kilojoules per head per day,” he said.

“It was a learning curve to say the least, but we know it’s an option in tough seasons.”

The Wyatts produce an annual clip of 97 bales from a March shearing, at an average micron of 18.3, staple length of 90mm and strength of 32nkt (inclusive of weaners).

During the fly strike management procedure lambs receive trisolfen pain relief and all their vaccinations, such as 3in1, Eryvac and Scabbiguard and when they are weaned, receive Weanerguard and Click.

Sheep are also dipped for lice every two to three years to relieve pressure on backlining chemical.

The lambs are weaned onto good quality feed in mobs of under 500 head before being drafted according to gender.

“When they’re almost one, we will bring them in for shearing, so we get a 3.5kg fleece at 17m and then sell them as they come up to target weight,” Evan said.

Depending on the season, 25pc of wethers are sold directly off-paddock with the remainder, and at least one third of the ewes, put through the feedlot to reach weight targets – generally between 48-52kg (liveweight) when destined for WA Meat Marketing Co-operative Limited (WAMMCO)

Evan said they relied on their professional network to stay informed on other market prices and this year, they sold a line of orange tag hoggets to a producer in Victoria, fetching $150/head on-farm.

For two years running the Wyatts have been awarded the WAMMCO Producer of the Year in the Merino small supplier category, for producers supplying under 500 lambs a year.

While Evan remains modest, he believes the versality of the breed played a role in their success.

“I don’t think we do anything special, I guess we’re a bit more intensive than most but it’s quite a surprise to be acknowledged,” Evan said.

“I like to value-add where I see the opportunity to do so, it can be more work, but it’s rewarding to see it pay off.”