The Australian Merino enterprise is in good form with strong returns.  When reviewing the data from several sources on the profitability of the Merino, there is every reason to support the Merino and be confident in its achievement.

MLA data backs up the trial results of the 6-year Elmore Field Days benchmarking which showed that the Merino had the highest $/DSE return at $69 and $70 compared to the other breed groups at $57-61. (See previous news article) An excerpt of MLA figures compiled from all the benchmarking across Australia shows the total income & profit on a $/DSE basis as below:

The facts: Merino wool production for 2015-2016 is forecast to go down by 7% and total Australian sheep figures are expected to be down by nearly 5% to less than 70 million.  This is a major concern for every sheep enterprise in Australia, not just Merino; this is also an opportunity for Merino enterprises to take the lead in rebuilding the flock with good profit margins.

The other good news is that the decline in Merino ewes joined to Merino Rams is not as dramatic as has been reported or expected – now looking historically, over the last 5 years the percentage of Merino ewes joined to Merino rams is 58% – 60% according to Phil Toland, AASMB immediate past president, who attended the forecasting meeting this week. This means that approximately 40% of our Merinos are being joined for 1st cross production, both maternal and terminal.  This information, based on data from ABS, is in contrast to reports of numbers of Merino rams joined down 30% and falling.  A recent Holmes & Sackett report also shows wool production on its own as being a very profitable enterprise.

There is some real optimism now for those who have stuck to Merinos instead of jumping ship creating a significant capital changeover cost to them, which is often underestimated.  The cost of having to buy in replacement ewes is exhorbitant and the biosecurity risk is enormous.  Merino enterprises  do not have to worry about either of these situations.

Of the estimated number of total breeding ewes on hand of approximately 42 million, just under 30 million are Merino ewes.

The following ABS data graph shows that despite declining overall sheep numbers in Australia (shown by the blue line in the chart below) the Merino ewe has in fact kept its position over the last 5 years with approximately 58-60% of Merino ewes being joined back to Merino rams. 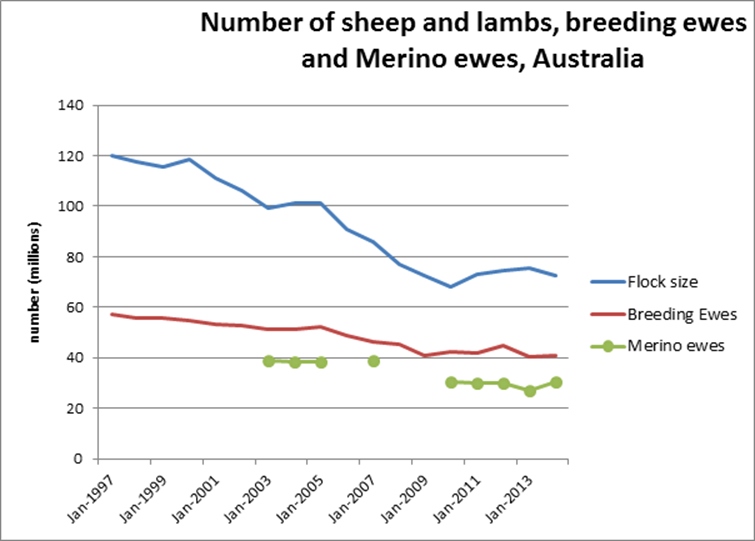 So, let’s salute and appreciate the Australian Merino for its strong production performance and versatility, with reliable economic returns.