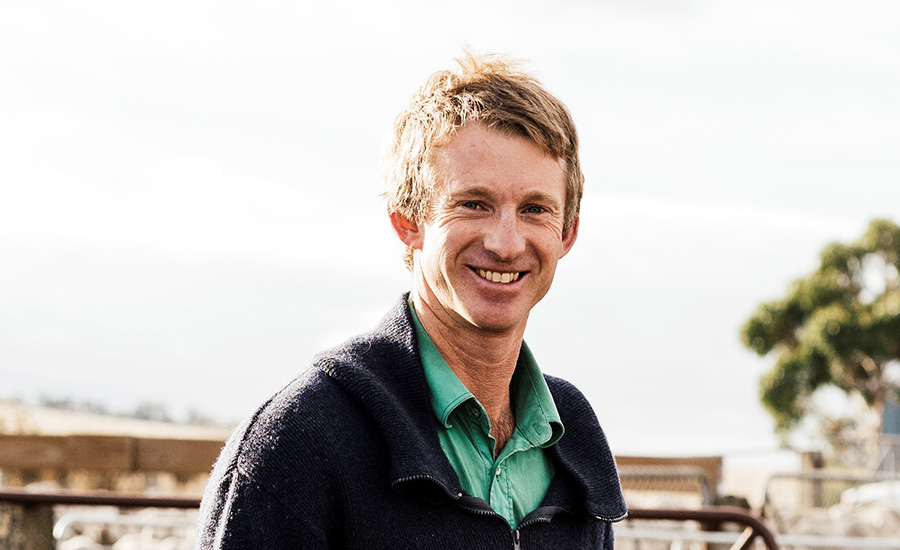 1. Best fit for our environment

2. By changing your genetics you can influence the price you receive for wool

A self-replacing Merino enterprise is reaping the benefits by selecting superior genetics to alter wool production and influence the price received for wool.

And they know the key to profitability in a wool growing enterprise is driven by wool production per hectare.

Operating under an average annual rainfall of 470mm, of those Merinos about 4000 adult wethers are grazed on a property in Central Tasmania.

Wethers are used within the operation as a “buffer” against the typically unpredictable rainfall.

“Wethers are the first thing to go if the season gets tough,” Charles said.

“However they are a very profitable flock because they don’t need a lot of looking after.

“Once they are grown and matured, they can generally look after themselves.

“And with fine wool prices where they are now, they are profitable, there is no question about that.”

Their average wool cut is dependent on the rainfall, but last financial year they produced about 380 bales of wool.

The weighted average, accounting for the volume produced of each type of wool, comes out around 16-microns.

“Our adult wethers last year, in a pretty good season, cut about five kilograms per head, which we were extremely happy with.

“For a very fine fleece, to cut well above $85 per head in fleece value, it is a very good article.”

At Glenelg their long-term average stocking rate is between 6 and 7 dry sheep equivalent (DSE) per hectare which Charles said is a reflection of the rainfall.

“Stocking rate is one of our main profit drivers. We do struggle to get it any higher, just because our rainfall is low and unreliable,” he said.

Ewes are joined in April for an early September lambing over a five-week period.

Last year’s lambing percentage (lambs weaned to ewes mated) was around 98pc, but Charles said it fluctuates between 90pc and 105pc.

“Scanning is an important tool in the operation, and we pay particular attention to multiples,” Charles said.

“We aim to match the nutrition to suit the animal’s requirements. A ewe with twins obviously has higher nutrition requirements than singles.

“We keep multiples separate and feed them accordingly.”

Lambs are weaned approximately three months from the start of lambing from the end of November running into the start of December.

All sheep are shorn once in a 12-month period with wethers shorn late spring and the ewes early autumn, five to six weeks ahead of joining.

The wethers are shorn earlier as a risk management tool, allowing them to de-stock if the season turns against them.

“If the spring is no good then at least that allows us to move them off before we run out of feed,” said Charles.

The average yield for the flock is mid 70pc, but the wethers that are run in the central plateau have fleece wool yielding in the low 80pc range.

Genetics are predominantly derived from a stud in the New England region of NSW.

“We have used other genetics but one stud has by far been the biggest influence on our flock,” said Charles.

“There is a premium for fine wool at the moment. And I realise wool is a commodity, however, I believe you can change the price you receive by changing the genetics.

“If you can find the right genetics that are significantly better than your own and continue to use them over a number of years you can change the price you receive for your wool.

“You can also change the amount of wool you are producing.

“The science behind that is really robust unlike most commodities where it is dictated by the market to some extent, but you can choose what part of the market you are going to be in as well.

“As you look at where you want to be, unless you are right at the top of the tree you can usually find a genetic source that is better than yours. Then it is just a matter of emulating that.”

He said the other benefit of running a fine wool Merino flock is being in the position to take those premiums when they come along, but if things are really bad, the option is there to join some of those ewes to a terminal sire.

“You have options with Merinos,” he said.
“If something else came along that completely replaced wool or it was able to be synthesized in a lab, I could turn around and join my entire flock to terminals and start breeding crossbreds tomorrow.

“You are not cutting off your options. But if I went the other way, if I went to a terminal operation, I would have to feed a lot more out to get the growth rates required to make it profitable, and then it’s really hard to go back the other way if you wanted the fine wool back again.

“If you have consistent rainfall and really high-quality feed it would absolutely make sense to produce as many lambs as you can out of a composite ewe because the meat market is fantastic.

“But for us, where we don’t have the advantage of good rainfall consistently and good pastures, Merinos are a better fit.”

Charles knows the key to profitability in a wool growing enterprise is driven by wool production per hectare.

“There is a fair bit of benchmark data around the country that supports that,” he said.

“So one of those things that influence wool production per hectare is stocking rate, which is driven by rainfall and grass.

“We look at growing as much grass as we can given the rainfall that we have got, using it effectively, and having the right genetics in those animals to make the most of the environment.”

Six years ago they made the decision to phase out mulesing.

“The year we decided to stop was a really dry year, so it worked for us.”

“There is no question though when you get a really wet year if you don’t get your management quite right – things like not getting your crutching done on time, there is a lot more fly pressure on un-mulesed sheep than mulesed ones.

“There is no doubt about that whatsoever.”

It has been a gradual process. Each year, over a five-year period, 20pc of their flock was not mulesed, giving the enterprise adequate time to adjust.

“We had time to adjust our systems to suit because we didn’t have to do it with every sheep in one hit,” Charles said.

“But the reality of not mulesing is if the whole of Australia went unmulesed there would be a massive increase of chemical use, which some parts of the market would not like.

“The other option is more crutching and the industry is short of shearers.

“For a lot of the industry, it is not as simple as just stopping mulesing tomorrow.

“There is yet to be a real alternative to mulesing outside chemical use.

“There are lots of things that have been tried, but making them work on a large scale haven’t quite got there yet.

“And that’s the most important thing – having a real viable alternative that all sheep farmers can use that is going to work, and being able to get people to use it.”

Charles said it was a comment from another woolgrower in NSW that led to the decision.

“He’d spent a lot of time and effort on marking his particular clip and at the time there was increased interest in non-mulesed wool from clothing manufacturers that had decided they didn’t want mulesed wool,” said Charles.

“He said ‘why would you close off a proportion of your potential market if you can manage it otherwise?’

“That was the prompt for me, and we stopped.

Charles and Sally forward sell a portion of their wool clip to the German outdoor apparel company, Ortovox.

“Each year we provide them with a certain volume of wool for their product – normally about 5000 kilos, clean,” Charles said.

“We are on the finer end to what they are looking for, as a majority of their sales are for a product that has a broader micron, so where ours is more of a niche product.”

A proactive marketing tip that Charles and Sally use to help sell their wool is to enable buyers to see the story behind Merino wool to understand this is part of what makes the fibre such a great product.

“You have to be prepared to open your farm up to people, let them see what you are doing. Be prepared to talk to them and see if your system fits with what they’re looking for. It never hurts to have your door open.”