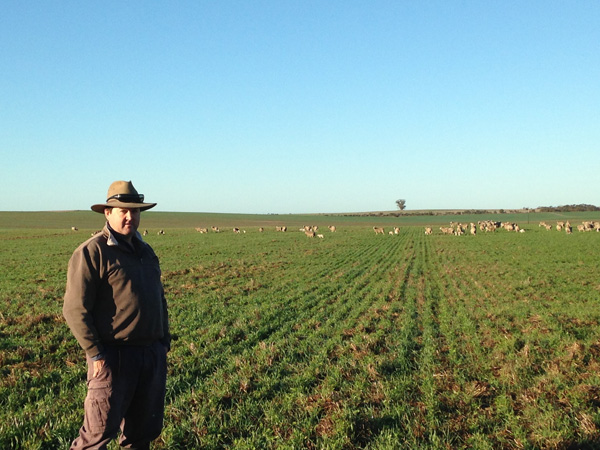 Merinos a vital part of enterprise mix at Curramulka

MERINOS are a vital part of the enterprise mix at Craig and Abigail Hickman’s Curramulka property Seaview, on the Yorke Peninsula, South Australia, producing $130 per winter grazed hectare per 100mm of growing season rainfall in 2016.

The Hickmans run 400 head of Merino ewes alongside a 600ha annual cropping program of wheat, barley, beans, lentils, vetch and peas. The flock is benchmarked each year with 2016-17 figures showing a gross margin per DSE of $91 and $393 per winter grazed hectare.

Improving their self-replacing Merino flock has been a key focus for the past decade, with the Hickmans working with Cousins Merino Services consultant Paul Cousins and Landmark animal production specialist Daniel Schuppan to target higher returns.

“At the end of the day Merinos are a very profitable animal and are easy to manage and handle, especially in comparison to crossbred lambs,” Craig said.

Using a consultant has helped Craig to tailor his enterprise to focus on productivity and marketing, which has resulted in a steady increase in profitability. Gross margin returns in the past four years have averaged $49 per DSE but it has taken four years to get the system right and 2016-17 season produced outstanding results of $91.80 per DSE.
A pasture seeding program implemented in sandier paddocks, to ensure better feed for the Merino flock has also helped to boost productivity.

“My gross margins are perhaps not as high as they could be because I drill feed every year for pastures,” Craig said. “But, it ensures I have better stock feed and need to spend less on grain and hay. It also means I can control problem weeds such as cape weed in these paddocks.”

“They are a profitable, dual-purpose enterprise which ties in well with my cropping program,” he said.

“I also find they are very easy to manage and handle.”

Targeting liveweights of 51 to 52 kilograms, the last lambs Craig sold at the end of January 2017 averaged $6.15 a kilogram carcaseweight.

Lambs drop at the end of June, , then steadily grow at rates of 250-300 grams a day. Lambs are weaned onto vetch pastures and fed grain, either lupins, beans or barley, then move onto bean stubbles, as soon as these are available.

They are shorn in December to early January, with a selection of ewe lambs marketed on AuctionPlus by Anthony Bray from Quality Livestock. “The remainder of lambs are sold on-the-hooks direct to the processor,” Craig said.

“They are discounted in comparison to crossbred lambs but if you add it up, you can cut 2kg of wool at $9/kg then that’s $18 a head, less shearing and handling costs, plus skin prices, so the price isn’t too far off crossbreds with a wool clip factored in. It works well in my eyes.”

Since deciding to focus on improving his Merino flock, wool cut is targeted, with the flock now averaging 8 kilograms of 20.5 to 21 microns of greasy wool per head. Wool is sold through Landmark’s Carmel Parsons via the auction system, with a reserve in place, last year it topped at 1122 cents a kilogram greasy for lamb’s wool, ewes made 1047c/kg for greasy wool in January 2017.

“I had frame but I needed more wool cut, so with the help of Paul I looked to target staple length, wool cut, growth rates and body size,” Craig said.

“To fast track development in ewes the flock was initially heavily culled. Paul selects and purchases rams on our behalf to match the requirements we’re after.

“There is a lot more nourishment in the wool, the growth rates are there and the rams are paddock hardy.”

Soils vary considerably at Seaview, from non-wetting sands to loam, grey, heavy cracking clays and limestone, so sheep fit well into the mix, giving the Hickman’s the ability to graze sandy soils that cannot be cropped.

Crop stubbles form an important part of the flock diet.

Craig has worked with Daniel to set a sustainable stocking rate, shifting his flock every three to four days (except during lambing) to ensure groundcover is retained, especially in sandier soils. Paddock sizes are kept to about 30ha, with the ewes run as one mob of 400 head. Craig said keeping paddocks to this size also had an additional benefit to his cropping program.

“I work by myself and this size paddock seems to work well for me. I know how long it will take me to get around the paddock, and it seems to be much more efficient,” he said.

This story is part of a series of case studies as part of the Australian Association of Stud Merino Breeders’ Breed More Merino Ewes campaign. The campaign aims to show producers just how viable the Australian Merino is in a farming enterprise. More information and case studies are available at www.merinos.com.au