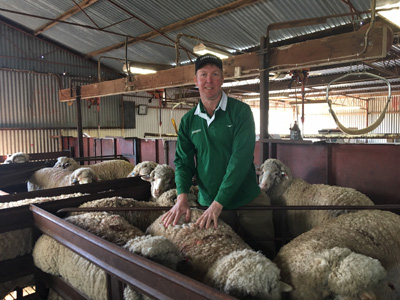 Clients: Works with a mix of producers across SA, from mixed farms to 100 percent sheep and/or beef enterprises

3 Adaptability – Merinos run in a range of environments – pastoral, cereal and higher-rainfall

MERINOS offer farmers a profitable option with the ability to produce a gross margin of up to $60 per dry sheep equivalent for self-replacing Merino flocks in the cereal zone according to 2016-17 Sheep’s Back Benchmarking Program figures, says Landmark Animal Production Specialist Daniel Schuppan.

He says a Merino enterprise also provides flexibility, allowing producers to target different markets in the meat and fibre sectors.

“We have a magnificent product in wool and meat, there are opportunities for producers to innovate, differentiate and engage consumers,” he said.

“There’s good demand for wool, then on the meat side, producers have a range of options – running a self-replacing flock, finishing wether lambs or selling as stores, selling 1.5-year-old surplus breeders, selling cast-for-age ewes for mutton or joining all or some Merino ewes to British breed rams to produce a first cross lamb. There’s many options which enable Merinos to fit into a production system that best suits a producer’s management and farm capabilities,” he said.

“Merino ewes can be joined all year round as there is less impact from day length on fertility so you can target them to lamb early and finish lambs on green feed or lamb later and finish on stubbles, irrigation or in a feedlot.

“Whether it’s in the pastoral, cereal or even high rainfall zones, Merinos fit in well across the board and can adapt to a range of environments.”

“You need to focus on growing good quality feed and utilise as much as possible,” he said.

“With genetics, it all comes down to setting breeding objectives for your flock, and then aligning them to a stud that fits.”

“Many producers are preferring to breed ewes rather than buy in replacements,” he said.

“Breeding a self-replacing Merino flock does have several benefits, particularly from a biosecurity standpoint. But at the end of the day it comes back to management, the money you make comes from management, through your pastures, genetics, animal health and marketing.”

Mr Schuppan says it is important to keep enterprises “simple”, have scale and get operations done on time.

“It’s better to have a decent line of wool and surplus sheep to sell, rather than multiple enterprises. It helps to minimise labour requirements. The benefit of having a first cross lamb in the system to offload early for seasonal risk management reasons can be overcome with different tactics.

“Focus on keeping it simple, for example with a self-replacing Merino flock in a 12-month period you can have one lambing, one or two shearings and sell a marketable line of surplus ewes, 1.5-year-old ewes and wether lambs.

“Also, if you need advice to achieve your aims, then look to employ outside help where needed, whether that’s through using someone else to select and buy your rams, or class your sheep, or review the whole livestock enterprise plan and do some budgets, use outside expertise with a fresh set of eyes where you can.”

Mr Schuppan says he works with his clients to “design a system”, discussing what they enjoy doing, identifying future plans and breeding objectives.

“We then sit down with a 12-month calendar and juggle when to complete different husbandry operations, for example when ewes lamb and when lambs are marketed,” he said.

“Once the target market is identified, then identify how it will be achieved. What is the feed base and how can you change or manipulate pastures to get a different outcome? Otherwise change the target market.

“Time of lambing is also key – particularly when aiming to maximise growth rates.”

Mr Schuppan says benchmarking is important to examine production indicators, such as stocking rate, growth rate, reproduction rate and death rate, and to compare performance within the enterprise/business year-on-year, and or against others to look for opportunities to improve.

He said this level of analysis has proved that self-replacing Merino enterprises had been “really competitive”.

“Merinos have provided a very good source of income in the past 12 months, compared to other enterprises in the mixed farming zone, but in the long-term they complement a cropping enterprise very well,” he said.

“The sheep industry consists of people, who are a mix of ages, working successfully together but I know many young people who want to expand their sheep numbers but just can’t get a break. So, if you are sitting on the fence, not enjoying the challenge or have a spare paddock, find these people as they want to take the sheep industry to the next level.”

This story is part of a series of case studies as part of the Australian Association of Stud Merino Breeders’ Breed More Merino Ewes campaign. The campaign aims to show producers just how viable the Australian Merino is in a farming enterprise. More information and case studies are available at www.merinos.com.au