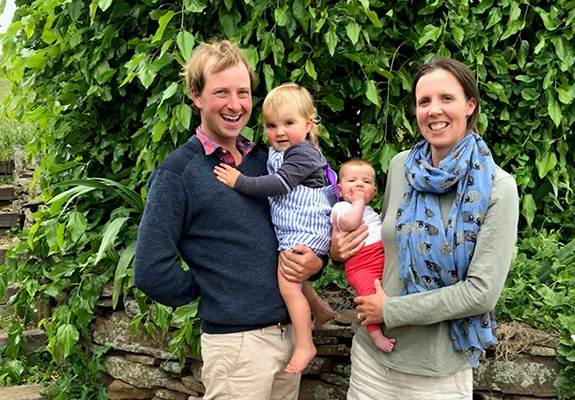 IT is a fine balance trying to increase wool cut and maintain a superfine fleece, but Tasmanian producers Josie and Henry Dunbabin believe it is a worthwhile pursuit to maximise profit.

Having the ability to generate multiple incomes from a single breed is just one of the reasons why the Dunbabins run a pure Merino flock at their farm “Milton”, at Cranbrook, north of Swansea.

They have experienced a tough few years of drought, with the region’s long term average rainfall of 550mm falling to 350mm, but Josie said they had been impressed with how resilient their Merinos had been.

“Merinos are best-suited to this environment,” Josie said.

“They are low maintenance and low cost, which is ideal for us as we have two girls, two years old and four months old, and Henry also works off-farm.”

Originally a teacher, after working on the family farm Josie came to realise agriculture was her true passion.

She and Henry have been running Merinos for five years and while they have achieved a lot in that time, Josie said she still considered them to be in a growth and improvement phase.

They produce superfine Merino wool averaging 16 micron and target premium markets, some of which the Dunbabins have been able to establish direct relationships with.

“It’s great to know exactly where our wool ends up, we take a real interest in who we sell to and find the whole process, even the audits, to be a valuable experience,” Josie said.

“We are always open to new ideas and want to learn as much as possible, animal welfare in particular is a big part of that.”

The extra effort required to meet the premium market standards has been worthwhile, with wool sales averaging $55 per head.

The annual Milton wool clip is around 88 bales from a July shearing, with the current wool cut averaging 4kg/head.

The average yield in the region is thought to be just under 4kg/head.

“We’re trying to maintain the quality of the wool and maximise our wool cut,” Josie said.

“We are aiming for a wool cut of 4.5kg/head but it’s a fine line with keeping our wool superfine.”

Their stocking rates are kept low and paddocks are generously screened with native bush, which Josie said was perfect for running wethers.

In a typical year, crutching is done in February/March, shearing in July and lambing in September, hopeful for optimum feed.

“We are trying to increase our lambing percentages, at the moment they are 95 per cent and we have gradually been increasing that using different strategies,” Josie said.

Keen to continually hone her craft, Josie completed the Lifetime Ewe Management course and Pasture Principles course and said she gained a lot of practical information which she has implemented in their own enterprise.

“We now keep the ewes in condition score three at joining, do pregnancy scanning and lamb in smaller mobs and sheltered paddocks.

“All those practices have helped us to increase our lambing percentages.”

Depending on the season, lambs are weaned at three months old and last year the Dunbabins introduced a drought containment lot and weaner program.

Through the weaner program lambs are placed in containment lots for three weeks on a specific feed regime to assist with rumen development, thought to increase their grazing efficiency by 30pc.

“It’s still early days and it is hard to measure but last year’s hoggets are the best we have ever produced, and I am sure that’s what made the difference.

“In a few more years I think we will know more.”

Josie said the drought lots provided feed flexibility and gave them the opportunity to finish animals prior to sale, but they were also working on improving pastures, resowing a certain amount of lucerne each season.

While they are looking to maximise productivity wherever possible, when it comes to visually assessing sheep to select top lines, Josie said wool came first.

“We check the hoggets for wool quality, then condition, then we’ll check the wethers again for wool, and then we’ll cull on age,” she said.

“It’s another upside of the Merino, we can get an income from both the wool and the culls.

“We have changed direction with the traits we are focusing on, we’re now looking at breeding a bigger-frame and faster growing ewe that produces more wool but maintains that wool quality.

“That direction change is based on looking at the figures and understanding our main profit drivers – wool and lambing percentages.”

Looking forward, Josie said continued growth was on the cards, provided they could secure the land necessary to do so.

“We would like to find more land to lease and run more sheep, as well as continue to improve,” she said.

“Merinos will play a big part the way for us though, especially given they are so well-suited to our native country.”

This case study is part of the Breed More Merinos campaign, demonstrating the unrivalled performance of the Australian Merino Ewe.