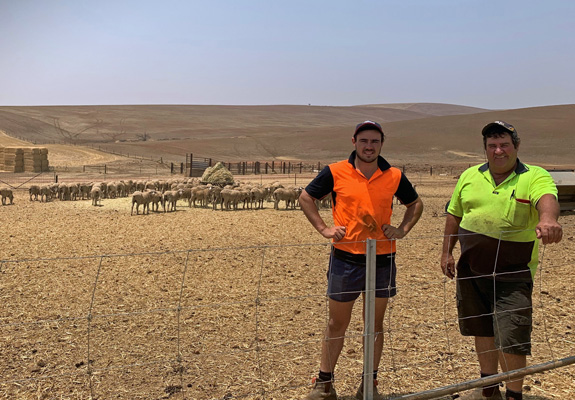 AS a self-confessed numbers man, Redhill farmer Greg Hayes knows full-well that Merinos are the most profitable breed for his sheep and cropping enterprise.

Greg farms with his wife Kerrie at ‘Semor’, Redhill, South Australia, over 1250 hectares owned and a further 70ha leased.

The Hayes have three children, Patrick (28), Amber (26) and Daniel (23), with Daniel recently joining Greg to work on the farm after gaining his qualification as a boilermaker.

They run 660 breeding ewes and crop a program of 850ha of wheat, barley and legumes, 150ha of feed including 40ha of hay.

Greg has been farming for over 40 years and still uses tried and true techniques that his father, grandfather and great grandfather used, which includes running Merinos, while incorporating more modern approaches in other aspects of his business.

For him, it needs to make sense to the bottom line.

“We’ve always used Merinos here, we can get a premium wool clip and they are truly dual-purpose,” Greg said.

“In a self-replacing flock I can use my own ewe lambs as breeders, so we only have to buy three or four rams per year, unless we have an excess of feed, in which case we can buy extra stock in on an opportunity basis to capitalise on that. We have that flexibility.”

Rams are joined on the first Tuesday in November (coinciding with the Melbourne Cup) at 2.5-3 per cent, which is one of those ‘tried and true’ Hayes family farming methods that Greg has stuck with.

“That suits our seasons here and it’s something my father, grandfather and great grandfather all did at that same time, so we’ve been following that here for the last 80-100 years,” he said.

The rams are left in for two months only, for an April/May lamb drop.

Greg said they were currently sitting at 100pc lambing rate, but he was hoping to increase that by trialling placing the ewes into smaller paddocks during lambing.

“Having the 100pc lambing percentage is great but I would like to see if we can push that out further, because having more lambs at weaning means more profit,” he said.

Through their hard work the Hayes have achieved some outstanding results, including last year, when they sold 477 lambs at an average price of $180/head, with the first line of 200 weighing in at an average of 26kg, fetching $196.38/head.

“Factoring in that we shore the lambs in October and got an average of $34.50/head for their wool, we were able to produce a $214 animal in under 10 months.”

Shearing takes place at ‘Semor’ three times in two years, or every eight months, with the annual clip size subsequently varying from 35-75 bales.

“We’re trying to breed a big-framed sheep with free growing, tight, white wool to keep the dust out,” he said.

Greg said he had calculated that he was cutting $160 per head of wool off his breeding ewes every two years, or $80/year per head.

“I did have an exceptional result last year and we got 1544c/kg from the breeding ewes, which was so great after so many years of hard work for not much, so we enjoy it while we can,” Greg said.

Greg’s vaccination schedule includes a dose of Ivermectin when the lambs are weaned, which is at 11-12 weeks old.

They are weaned on to a specially sown paddock of oats under sown with Rasina vetch, with 60kg of MAP fertiliser.

“We have always weaned the lambs early, it’s something my father taught me,” he said.

“A lamb will be a bit slow to recover for the first three weeks, but by the time they are two months weaned, they will be more robust and growing faster than the average lamb still with their mum and the ewe will also recover condition and put on weight, so it’s a win-win.”

The Hayes have just established their own feedlot, with the aim of adding another 4kg of weight onto their lambs.

“We’re hoping to value add to our lambs and the thinking is that by locking them up they won’t be able to walk it off,” Greg said.

“We generally weigh them on visual inspection and like to sell the top line off to allow the second line to come through, trying to keep them under the 32kg mark, so we’ll sell them in three lots.

“I think after two years we should have a good indication of whether or not the feedlot has been worthwhile.”

While many of his neighbours have opted for full cropping programs over the years, Greg has never wavered from Merino production, partly because ‘Semor’ is not fully arable, but also because he favours the breed from a business perspective.

“We’ve always been Merino producers, they are so well-suited to this area and our production system, as 25pc of our land is undulating and hilly, so having stock, particularly Merinos, is our most profitable choice,” Greg said.