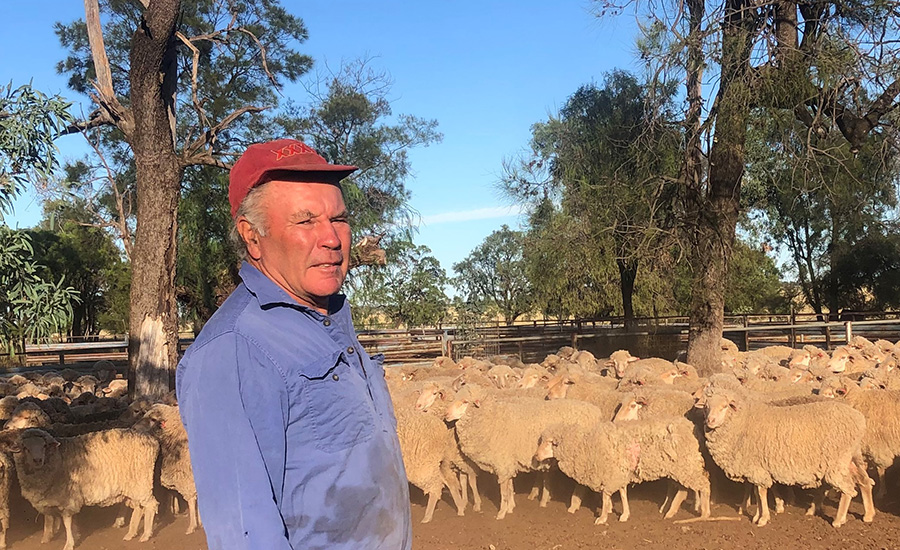 “By switching to breeding our own Merinos, instead of buying in wethers, there was clearly a significant increase in money to be made”

THE farming mud map was always destined to lead Jon and Kerri Hacker toward Merinos.

Around Muckadilla, in the Maranoa region, Queensland, the Hacker name is synonymous with breeding Merinos, as Jon’s father Tom and brother Peter Hacker run a family Merino stud.

When Jon and Kerri began farming in their own right, they annually purchased Peter’s commercial Merino wethers for the sole purpose of producing wool, walking them the easy three kilometre journey between the brothers’ properties and where they would stay for five years.

Jon and Kerri would aim to run enough wethers to average seven kilograms of wool per animal per year, then once the wether had enjoyed their five years’ residency at the Hacker’s ‘Summer Hope’ property, they would be sold to processors.

For a long time, this was a profitable and productive enterprise for the couple, however as markets and breeding values changed, Mr Hacker recently decided to venture back into breeding his own Merinos.

“We compared the numbers and worked out that by switching to breeding our own Merinos, instead of buying in wethers, there was clearly a significant increase in money to be made,” Mr Hacker said.

“If we worked on the assumption of getting a five kilo fleece and a lamb worth over $100 from every ewe, every year, the numbers were a lot better.

“As I got older too, the wethers became too heavy for me to handle by myself, so we started to consider other options.

“I was never going to be a sheep breeder again, I thought I’d stick to trading sheep, but the returns for Merinos are so good at the moment, it was hard to resist the opportunity.”

In October 2020, Mr Hacker purchased 1200 mixed age Merino ewes for $160/head that had come into the saleyards from a property in the depths of drought.

The poor condition of the ewes and the timing of the purchase meant the Hackers could give them a good six months to recover and gain weight again, before joining began in March 2021.

The rams were left in for nearly seven weeks at 1.5 per cent, with lambing occurring throughout August and September last year.

Mr Hacker pregnancy tested in June and was delighted to achieve 92pc in lamb, with majority of the remaining dry ewes appearing to be young maidens that were forward-sold to another producer for a second chance at conceiving.

After pregnancy testing and sending the dry ewes off the property, Mr Hacker reduced his mob sizes from 200 to 150, as many twins were found during scanning.

As a result, they achieved an average of 115pc lambing across the board, with many of the younger mobs reaching up to 130pc.

“We had to reduce our lambing paddock numbers as we found a lot of twins, so we ran them in mobs of 150,” he said.

“That way they were afforded a lot more room to move and plenty of feed available on native grass country, supplemented by lick feeders.

“We really noticed it in the condition of the lambs, as they were very big and robust and many hit the 40kg mark by four months of age.

“It just shows the potential of what Merino lambs are capable of when given the right conditions and half a chance.”

To fast track his breeding objectives, Mr Hacker opted to use electronic tagging on both his ewes and lambs, tagging lambs when they were born and recording data such as their mother, their 4-5-month-old weights at weaning in January and then weights again five months following that.

He wanted to be able to pinpoint the robust lambs that not only thrive in the early months, but in the recovery months following weaning.

Mr Hacker also measures performance indicators of his ewe flock, including the quality and amount of wool, number of lambs they produce, and how well their weight and condition recover after lambing.

The highest performing ewes and lambs will be retained for the upcoming breeding program, which is focused on breeding a Merinos that rapidly gains weight, has consistent full-body fat cover, good conformation and top wool quality averaging 18 – 20 micron.

An integral part of the family’s operation has always been their wool, and Mr Hacker said he has spent many years minimalizing the use of insecticides and drenching, while trying to avoid mulesing and instead crutch more often and perform faeces egg counts.

All of which, in his opinion, contributes to producing the world’s most wonderful natural fibre in the most desirable and saleable condition possible.

Shearing occurs in May and in previous years when Mr Hacker ran a wether flock solely for wool production, he would regularly average 7kg per wether.

Now he’s breeding his own flock, his focus has shifted to producing an early maturing lamb that can be sold at five or six months of age for $130/head, that also contributes around 5kg of wool to his bottom line.

“Anything I’ve done, I’ve always wanted to do it well,” Mr Hacker said.

“I’m a Hacker, and we are traditionally a Merino family, and there’s great pride in that.

“But it’s also quite exciting what’s happening in the Merino industry right now, especially with the advancements we’ve made with improving wool type and quality.

“The dual purpose of the Merino offers so many more benefits, because if you can reach a 5kg wool cut and over $100 per lamb, then your bottom line will definitely be looking a lot better.”

This case study is part of the Breed More Merinos campaign, demonstrating the unrivalled performance of the Australian Merino.