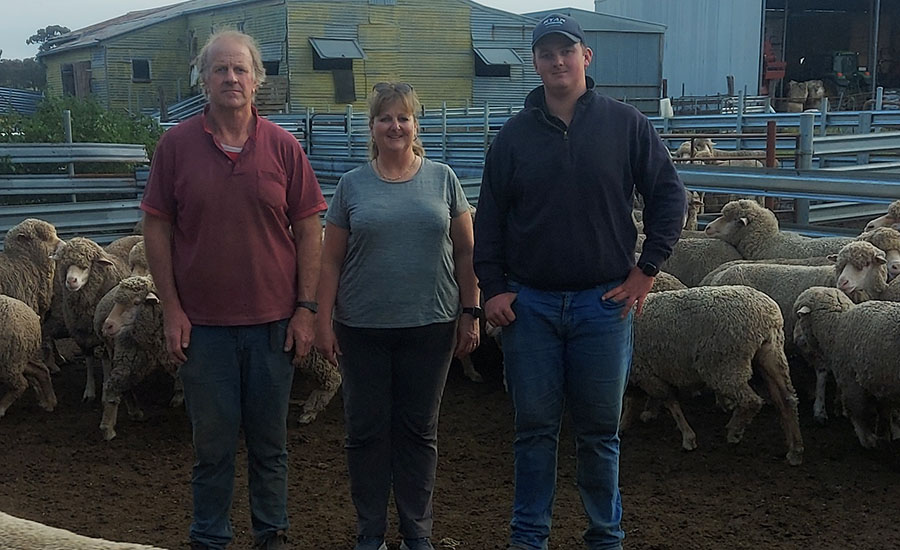 1. Versatile: can be used for a variety of different breeding purposes and market opportunities

2. Self-replacing nature is the most efficient and profitable

THE Merino is the most versatile breed in the world, according to Victorian farmer Kieran Flood, and it’s never been more prominent than the past 18 months.

Shining brighter and more in demand than ever before, the ability of Merino sheep to adapt to and suit multiple markets has held the breed in good stead, even amidst global turmoil, a pandemic and tough seasonal conditions across large expanses of Australia’s agricultural regions.

When the long-awaited rain fell across the parched Eastern states in 2020, the need to restock grew alongside the hope in the glorious mud, and it was ‘more Merinos’ at the top of many sheep farmers’ shopping lists.

Producers who managed to retain their Merino flocks such as Kieran and Terrie Flood, Shelbourne (near Bendigo), Central Victoria, enjoyed a resurgence of demand and premium prices for their premium product.

The Flood family had been preparing for conditions quite the opposite of their surname, as dry and tough seasonal conditions very nearly forced them to start carting water for their 1500 Merino breeders, when their dams had nearly run dry at the end of March 2020.

However, just a few days later an opening rain of 50mm kicked off the beginning of what turned into an excellent season, with the rain steadily falling thereafter and the value of their retained Merino flock steadily rising.

The fortune has flowed on and this year has continued to be a favourable one for the Floods, so far tracking slightly above their 450mm of annual rainfall, ensuring their sheep are in excellent condition with access to plenty of water and quality feed.

As a result, Mr Flood said they recently received $8.90 per kilogram over the hook for their 12 month old Merino lambs, the highest price he had ever received for Merino lambs.

Earlier this year in February, he was also paid just over $200/head for his Merino wether lambs when they reached a carcaseweight average of 24kg.

“It’s such a pleasing result, to see reward for all of our hard work coming through,” Mr Flood said.

“I think that level of prices may drop off a bit and settle, but I also think it will have to become sustainable.

“The Merino has come a long way with breeding the right kind of meat characteristics and the great prices reflect that.”

The Flood family’s 450 hectare farm has always carried a Merino flock, ever since the early days when Kieran’s parents purchased the initial parcel of land 50 years prior.

The dual-purpose nature of the breed and numerous market options has ensured Kieran and Terrie continue to see the benefits not only for their farming operation, but the wider community and environment.

Benefits include being a self-replacing breed, in addition to worldwide demand for wool as a natural and sustainable fibre, paired with excellent plain-bodied meat characteristics.

There is also high demand for Merino ewes as mothers to prime lamb operations, their maternal traits and hybrid vigour attained by using different breeds for different purposes has proven essential to a successful prime lamb business.

Having always been a wool man, perhaps the most satisfying benefit of the Merino for Mr Flood is providing the wider community with the opportunity to buy and wear a sustainable, natural fibre, produced locally by farmers who are among the best in the world at what they do.

The Floods previously held shearing in April but after fighting a losing battle with grass seeds, they had shorn them in January this year, with another round of shearing set to get underway shortly in October, in accordance with their new routine.

Then in their effort to change shearing from April to October, the Floods held shearing in January when the flock held 9 months’ worth of wool on them, but still managed to average 20.7 micron, yield 70.7 and earn 924c.

By changing shearing to October, Mr Flood said he hoped to maintain and improve on a yield above 70, and is confident the wool market will continue to flourish.

“I have been a shearer for over 30 years, I’ve always loved Merinos,” Mr Flood said.

“I mainly worked locally and learned a lot from other farmers in the area, how they farmed and how they ran their sheep.

“Wool is such a natural soft fibre, there’s nothing much more satisfying than seeing a nice fleece spread across the table and seeing where all of our hard work has gone.

“We used to cut more wool than we do now, but now our lambing percentages are higher, and the sheep themselves are more plain, bigger and meatier, so it has all balanced out.”

The rams are joined at a rate of one ram to 80 ewes in mid-November for six weeks to achieve a mid-April lambing.

In recent years they have achieved over 100 per cent lambing rates and pregnancy scan the females 80 days after the rams have gone in, separating them into twin, single and dry mobs for better feed management and an effort to avoid mis-mothering.

As an insurance policy, a handful of White Suffolk rams go in with the dry ewes to give them a second chance at conceiving before being sold.

To further add value to their Merino asset, Mr Flood also runs a small feedlot to feed around 5000 lambs a year, a combination of both his lambs and mobs that are brought in to be finished, when the opportunity presents.

In Mr Flood’s eyes, the options and opportunities are endless with his versatile Merino flock, and he can only see the benefits continuing for many years to come.