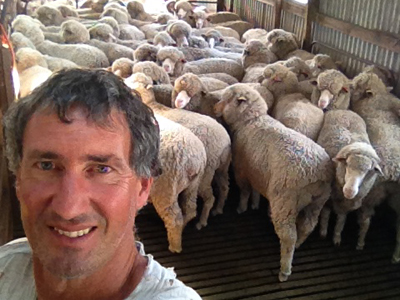 Why Merinos? My top 3 reasons …

2 Performance – electronic identification has helped to put a dollar value on each hogget ewe, ranging from $95-$147 each

MERINOS are the breed of choice at Martin Ramsay’s Glenayr property at Warooka on South Australia’s Yorke Peninsula.

Martin, who runs the property with his father Howard, says while he had dabbled in crossbreds, for the past 20 years he had focused solely on his self-replacing 1000 ewe Merino flock, running about 2700 Merinos including lambs and hogget ewes.

For 15 of those 20 years, Martin has benchmarked his flock, making solid improvements in increasing dollars per hectare. The current average gross margin is $94 per hectare per 100 millimetres of growing season rainfall.

Martin says the economic returns helped him to decide to focus solely on a self-replacing Merino flock. This was because while the returns were similar for Merino and crossbred production, it was the fleece potential from the Merino wether lamb that caused overall Merino profitability to come out on top.

While about 374 hectares of arable land at the 1214ha property is sharefarmed, Martin focuses on livestock working with Landmark animal production specialist Daniel Schuppan to process benchmarking data.

“While these key factors vary year-on-year, I’ve seen a steady improvement in all of them since I’ve been benchmarking. This takes the guess work out of measuring profitability and you can get a clearer picture of where you’re going season to season,” he said.

“Only half the land we have is arable and suitable for cropping, and we only sharefarm a portion of it. It wasn’t economically viable for me to run cropping in comparison to livestock due to machinery costs, and not having any machinery agencies or mechanics nearby to service or fix machines when needed.

“Beforehand, two-thirds of my income would have come from cropping, now livestock would be three-quarters.”

Average lambing percentage was about 110 to 115 percent, but was slightly lower this year due to “terrible weather” when ewes lambed in July-August.

Ewes lamb in July-August and all sheep are shorn in November-December. For the past four years, all wether lambs have been weighed after shearing, with the heaviest two-thirds put into paddocks with grain feeders, and the remaining lighter lambs run on Kikuyu pastures.

Lambs weighed, on average, about 25 kilograms liveweight at Christmas, and were sold in April-May at targets of 50kglw, dressing out at 20-22kg carcaseweight. He recently sold lambs for $5.20-$5.50/kgcw and was “very happy” with the price.

“The later in the season I can sell them, the better the price,” Martin said. “It also means I can shear a fleece off them which is extra profit.”

Electronic identification tags have been used to record bodyweight, fleeceweight and micron performance in ewe hoggets for the past two years. Martin says it creates better individual performance data in his flock.

For the first time in 2016, Martin also used current wool, sheep and lamb prices to calculate a dollar value for each ewe based on their bodyweight, fleeceweight and micron. Values varied from $95-$147, after firstly culling 20 percent visually.

“There was up to a $52 difference per animal between the top and the bottom of the ewes I classed, after first culling visually. It’s quite a difference,” he said.

Pastures were also a focus for the future, with Martin saying Kikuyu pastures had been planted to give more green feed over summer.

“One block had quite salty water, and previously we couldn’t run any young stock there, only about 200 wethers. We have now planted it to Kikuyu and have also connected the paddock to the mains water line, about three kilometres away, so we can have fresh water,” he said.