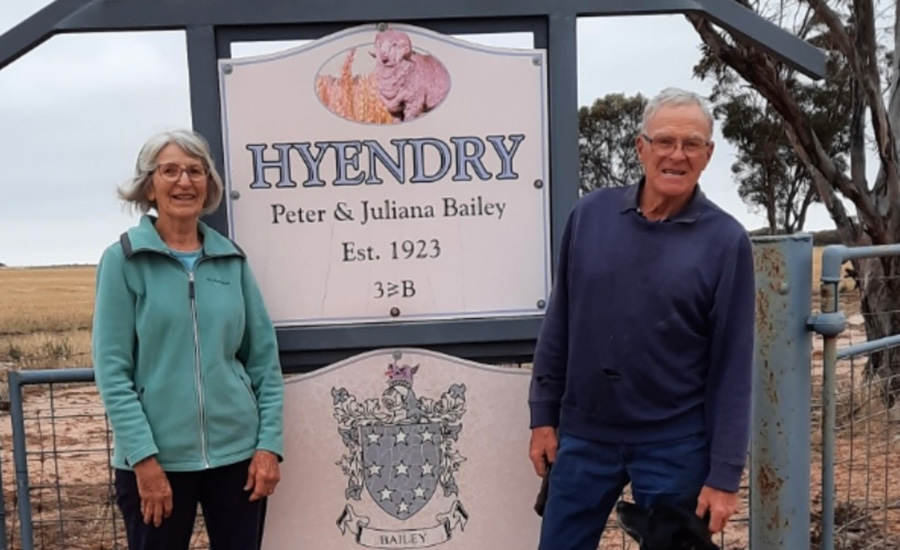 1. Effective risk strategy that helps flat-line our income on tough years, as our Merino sheep are always producing something for us regardless of seasonal fluctuations.

2. Keep them in good condition and look after them, and they’ll look after you and your bottom line.

3. Investing in pastures and genetics are key to a successful Merino enterprise.

LET’S talk numbers for a moment, shall we?

If a 75-year-old farmer has been continuously running Merino sheep for the past 58 years, with the most recent decade witnessing an unparalleled rise in innovation, genetics and high prices, what does he have?

A very successful and profitable enterprise according to Narembeen producer Peter Bailey.

The West Australian Wheatbelt sheep producer has spent nearly six decades gathering an enviable depth and breadth of knowledge of the Merino sheep, seeing it evolve into the highly productive sheep it is today.

Farming together with his wife Juliana, Peter is a passionate and progressive Merino man, never once wavering from his dedication to the breed to complement his mixed farming enterprise.

Currently running 3600 Merino sheep, 2000 of which are breeding ewes, 1000 lambs and 600 ewe weaners, Peter and Juliana are always receptive to new innovations and practices to boost productivity.

For example, when mulesing was first introduced to combat flystrike, the Bailey’s were one of the first in their area to adopt the practice and to this day continue to strive for improved efficiency.

They are also continuously improving and upgrading their sheep infrastructure, particularly their sheering shed.

“I think the last ten years has been really exciting for people in the sheep industry,” Mr Bailey said.

“There’s been so much progress and innovation coming along in leaps and bounds, it’s an exciting time to be in sheep, and Merinos in particular.

“There’s always going to be people going in and out of sheep, but it’s those who have stayed with them who are passionate about improving what they do, and doing it to the very best of their ability.

“Adopting measures such as improving pastures, genetics and using innovative products, all of which have come such a long way in the past decade and make for a more efficient sheep enterprise.”

Pastures play a huge part in the success of the Bailey’s sheep program, as they carry enough feed to see them through two years, an unusual occurrence in their area.

As a result, they’ve placed a heavy emphasis on planting pastures in recent years, including serradella, medic and oats, purely for sheep feed and keeping their ewes in condition over the dry summer and autumn months.

This is largely due to lambing occurring at the end of March and through April, after the rams were joined for six weeks in the previous year, at a rate of 2 per cent from October until Christmas Day.

The rams are fed lupins for six weeks prior to joining to ensure they’re in top condition, while the ewes are run on the pasture paddocks over the hottest months of January, February and March.

This is to ensure they’re in great shape to conceive then carry a healthy lamb, and with an average lambing percentage of 89pc, Peter said the conception rate was high but they are currently working on improving lamb survival.

Feed is of utmost priority all year round, and a great indication of when pasture paddocks are waning is to run a trail of feed out.

If the ewes clean it up quickly, the pastures have been depleted and Peter knows it’s time to supplementary feed.

“In my mind, the success of a sheep flock comes down to two key factors really; pastures and genetics,” he said.

“If you try your best to keep your sheep in good condition with your feed supply, and have solid genetics to back it up, the Merino will definitely perform for you.

“The dual purpose nature of the Merino is a risk-management strategy that really does help flat-line your income in the tough years.

“They will grow wool whether it rains or not, and that right there is money on their backs.

“A true dual purpose sheep will have a good carcase and plenty of quality wool on them, and while the prices are so favourable, there’s significant reward for effort.

“The Merino will produce something for you no matter what.

“Even when crops are decimated by droughts and frosts and it’s completely devastating, you’ve always got your sheep out there making you money.”

They recently had their seven month old wether lambs shorn and achieved an average of 3.6kg, making sure they obtained a wool cut in October before an opportunity arose to sell them.

In the past, they have sold their wether lambs to feedlots for $3/kg liveweight, but they usually only decide to sell when the farm isn’t able to carry them any longer.

This year an ideal wet winter season propelled the Bailey’s Merino operation to flourish, with two mobs lambing over 100pc and the growth rate of their lambs accelerated thanks to the flush of available feed.

Peter said they will play the season out and see how the lambs go, as current sheep prices are so good they can afford to wait it out and carry them a bit longer.

Last year, the Bailey’s averaged $170 across all sheep sold from their property and are looking at $6/kg for their lambs in the current market.

Another profitable jaunt the Bailey’s embarked on over the past four years was taking the opportunity to sell mated Merino ewes to eastern states buyers for an average of $180/head.

Even though the seasonal conditions have been ideal and meat prices are reaching valuable highs this year, Peter thinks there will soon be a plateau of the sheep industry.

“I think it will flat-line at some point, but people who run sheep and are passionate about them irrespective of seasons and markets will continue to improve and invest,” he said.

“The key will be to keep investing in pastures, feed, genetics and innovation.

“I think at the very core if it all, if you’ve got your pastures and genetics right, you can’t go wrong.”