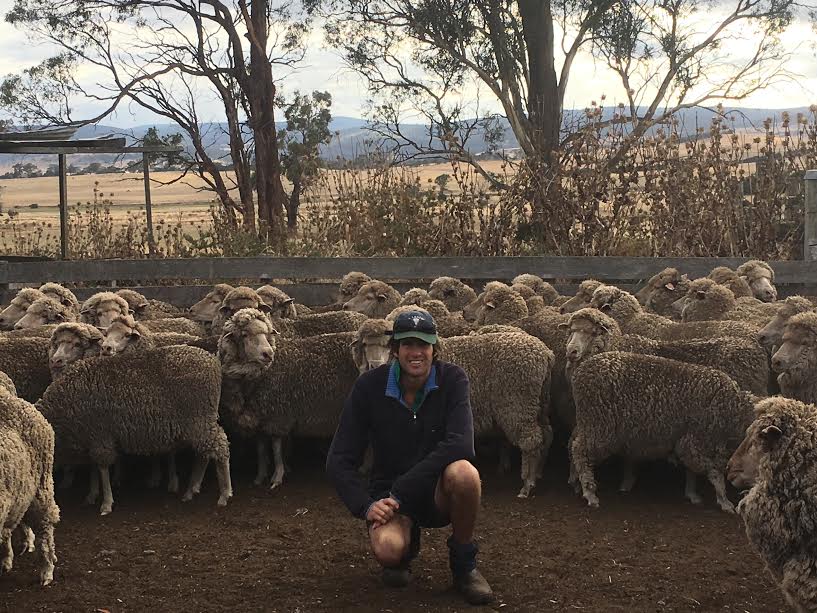 2 Environment – Merinos are a better match to the region where the Lynes farm, not having the feed requirements in the drought years.

3 Spread risk – Merinos provide a dual-income from meat and wool, with lambs sold for $6.50/kg

MERINOS consistently return profits of up to $60 per dry sheep equivalent and $40/DSE for lambs at Sam Lyne’s Riccarton property at Campbell Town, Tasmania.

Sam farms with his father Crosby and brother Angus, running 7300 ewes on the 2600-hectare property, with 3500 of the ewes run as a self-replacing Merino flock and the remainder mated to terminal and composite sires.

He said running a self-replacing Merino flock had helped to spread risk with dual income streams from meat and wool.

“Meat breeds are just relying on a strong lamb market,” he said. “We sell Merino lambs to a nearby abattoir that opened up a market five years ago, with the Middle East and they like 12-18kg Merino lambs. It allows us to sell our Merino wether lambs earlier and still make decent money.

“If we were to go down the meat breed road it would be hard to get back into Merinos, whereas Merinos offer that flexibility. If you have the bigger meat breeds, you ha ve less sheep and you have the associated feed requirements which isn’t ideal for us in our unreliable climate.”

The Lynes run Merinos at 12.5 DSE for winter grazed land, which includes dryland and some irrigated land, producing a profit of about $500/ha.

“We have a pretty diverse system, sheep and crops work well together on our property and in a year like we have just had, the high prices for wool and meat make up for the poor cereal prices,” Sam said.

“Making $500/ha from sheep is good especially if you consider the low risk involved. Sheep also have an economic benefit in weed control and removing crop residues.”

Sam said their Merinos had a more medium-frame, meaning handling was easier.

“Merinos aren’t as big so they are easier to handle, which is better for the shearers,” he said.

“There’s more long-term sustainability for everyone. The country we have is ideal Merino country, in a dry year we would have to keep the feed up to another breed whereas Merinos don’t have the feed requirements that these other breeds need.

“Then, you also have the wool which is going really well at the moment and lambs are very comparable (in price) at the moment.”

“It’s a very comparable price to crossbred lambs,” he said. “Merinos have the potential to do just as well as first-cross lambs.”

Wool prices have already been locked in for a quarter of the Riccarton clip at 1530 cents a kilogram clean for June, and rates were also locked in for July 2018 at 1650c/kg clean. On average, the Lynes produce 45,000kg of greasy wool a year. Wool is marketed through Roberts Limited and sold in Melbourne.

“Our main aim is to produce lots of wool with good strength,” Sam said. “We have 19-micron wool and cut 5.5-6kg per head with an average yield of 72 percent, but this can vary depending on the year and what the ewes have been run on.”

Of the 2600ha property, 460ha can be irrigated, so dual-purpose crops are grown, and are currently being watered for autumn feed.

Sam says on the two properties they run, there is a mix of red loam soil, open tussocks and improved pastures. Lambs are dropped in August, in-line with seasonal feed availability.

Rams have been sourced from a well-known stud in New South Wales since 2011, partly to shift to poll genetics but also to improve fertility and improve the early maturity of lambs. Since the switch, lambing percentages have risen from 80pc to 100pc. The Lynes have also scanned for dry, single and multiple pregnancies during the past three years.

Lambs are sold by June, before they cut two teeth. They are weaned and run on stubbles, weighed, then sold on-hooks once they fit into required weight categories, either the 12-18kgdw bracket to Tas Quality Meats, or if more than 18kgdw sold to Victoria.

“It depends on what price and seasonal conditions as to where we sell them,” Sam said. “If prices are better we can keep until heavier, regardless though we want to get them off by June to free up feed before ewes lamb in August.”

“I like the flexibility of the Merino,” he said. “If you have a fertile ewe that is producing plenty of lambs and quality wool, I find it hard to beat.”