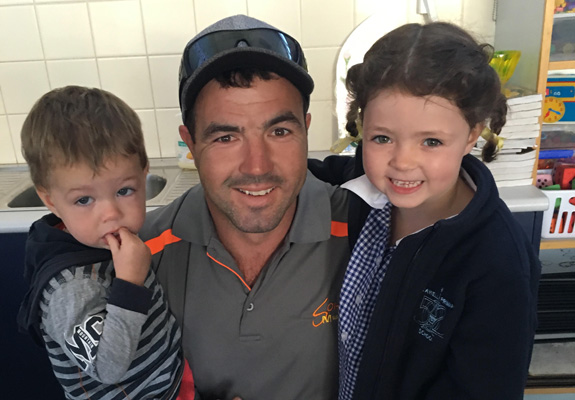 STAWELL producer Scott Nicholson likes to control as many variables as possible to maximise profitability in his livestock operation.

It’s why their whole flock are fitted with electronic identification (EID) tags and why they built a 4000 head capacity (lambs) feedlot, with a further four pens used for confinement feeding of 4000 ewes.

It’s also why they run their operation from a 100pc Merino base.

“I genuinely believe that Merinos are the most profitable animal we can run,” Scott said.

“It allows us to hedge our bets between wool and meat, it’s risk management for us.”

Scott’s parents, Robert and Lorraine, are also still involved in the business, which is run over 2000 hectares owned and a further 900ha leased.

The Nicholsons run 5500 Merino ewes stocked at 8-9DSE/ha, of which 55 per cent are mated back to Merinos in a self-replacing flock and the remaining 45pc are mated to White Suffolks for terminal lamb production.

They also crop a 1600ha cropping program, with barley and some hay retained for feed.

Joining takes place in mid-February at 1pc for a mid-July lambing, which is currently yielding a lambing percentage of over 110pc.

For Scott, a 2018 Nuffield Scholar, ewe condition going into joining is one of the most important considerations.

They supplementary feed with protein, which varies according to the season but is generally a minimum of 500g of lupins per day for two-weeks prior to, and a week into, joining.

“We need to understand our ewe and where it’s at in life, the importance of meeting energy requirements during key times so they are going forward,” he said.

“As long as we can do that, even from an average base, we’ll still be okay because it’s better to have them average going forward than really good and going backwards.

“I rate joining as number one when it comes to importance of condition, because if we don’t get the lambs inside then we can’t get them on the ground.

“Number two would be nutrition coming into lambing and number three is survival.

“I think if we do everything we can for them in the lead up, then hopefully survival takes care of itself, because while we can’t control climate, we can control the conditions when we join and what I put into them pre-lambing.”

Six to eight weeks out from lambing, Scott said they were vigilant about mob placement, factoring in twins/singles and the associated nutrition requirements.

Weaning is done from 12 weeks, with some flexibility to allow for season variability, and lambs are put into the feedlot.

Vaccinations include a 6 in 1 shot and Gudair at marking and Eryvac at lamb marking.

Shearing at Bretton Estate is done three times in two years, with the ewes shorn in June, young ewes shorn in October at just over one-year-old and lambs shorn in January.

This produces an annual non-mulesed clip of between 200-250 bales, at an average of 19.5 micron from the older sheep and 18m from the younger sheep and lambs.

Scott said they currently averaged 6kg/head wool cut from their ewes, with a 70pc yield.

Genetics for their commercial operation are derived from their Merino stud, and Scott said they aimed to produce a genuine dual-purpose sheep.

“We want a sheep that will cut us an acceptable amount of wool, with a fast-growing, good carcase that performs well in the feedlot,” he said.

“That feedlot performance is quite critical for us, as most of our lambs are going through on feed so much of our decision making is geared towards that.

“Our ram selection is based on growth and fertility, while trying to maintain the wool as a viable resource as well.

“While I obviously see the importance of genetics, I also believe the fundamentals of running livestock of any kind is management.

Finished crossbred and Merino lambs are sold according to the market, with generally 50pc going to the local trade and 50pc to the export market.

Going forward, Scott said they would like to utilise their feedlot to explore the opportunities of ewe lamb joining.

Scott said using EID, they were able to track the performance of each sheep so didn’t use weight targets but instead looked at an economic basis.

“If each lamb is averaging 300g/day, then we know what our costs are and when we need to sell them maximise our profits,” he said.

“That’s the beauty of this system, it’s not impacting other areas of the farm and it’s allowing us to control our costs. It can be expensive, but it gives us flexibility.”

Over the last few years as sheep prices have risen, the Nicholsons have started to focus more on their own pastures, sowing mixes such as Moby forage barley for winter/early feed.

Scott said annual pasture production was tricky, as they were 95pc annual based and had to grow everything from a seed.

“It’s a problem and it’s one we’re having trouble finding a solution for, which is why the containment has become so critical for us,” he said.

While they are not part of an active group, Scott said he did a lot of benchmarking analysis within their own operation.

He said they focused on output from a dollars per hectare perspective, factoring in the winter graze area provided.

Last year they averaged an impressive $280/head on their crossbred lambs, albeit with an estimated $65/head feedlot cost.

“We need to make sure they not only perform as far as a sheep flock goes, but also as far as what else we could be doing on that land,” Scott said.

“We can always manipulate our cropping program either way if the sheep don’t pull their weight, so it’s totally an end-game approach for us.

“The best thing for us is that combination of the wool market and prices for lambs, it put the industry in a good position and it really stacks up against a high-input cropping program.

“We’re confident that a 100pc Merino base stacks up for us financially and that it will continue to do so.”