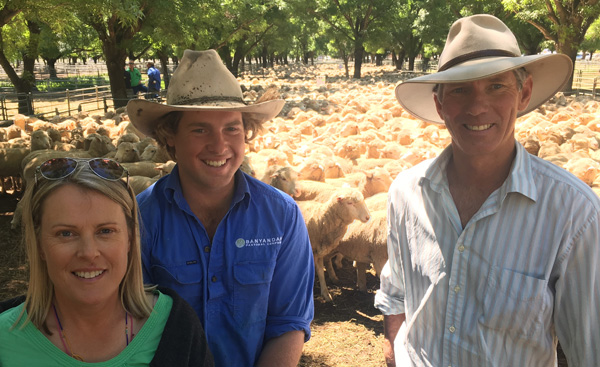 2. We enjoy the challenge of trying better ourselves and find more ways to improve and breed a profitable sheep each year.

3. Merinos work within our environment, our natural landscape and its about looking after our country and getting the best out of it.

WHEN Moulamein farmer Ian Shippen drifts off to sleep each night, he rests easy, knowing his sheep will have grown him seven more bales of wool by the morning.
It’s a comforting thought for the passionate Merino producer, who has poured over the sums for many years and worked out early in his career that wool is a consistent winner.

Averaged over 52 weeks, the Shippen family’s 44,000 self-replacing Merino flock fill around 7 bales per day, essentially culminating in over 2600 bales per year and a very efficient operation.

It’s always been about getting the most from their Merinos for Ian and wife Camilla, who are big supporters of the Australian Association of Stud Merino Breeder’s (AASMB) latest Breed More Merino Ewes campaign.

In order to build their own Merino ewe numbers, the Shippen’s have spent many years gradually expanding their enterprise through buying and selling property, taking some big risks and shifting further afield from irrigated areas to more pastoral plains.

From the very beginning of their farming career, the Shippen’s wanted to run a thriving large-scale Merino operation and set about building that dream by initially purchasing the modest 1821 hectare family farm ‘Banyandah’ from Ian’s parents.

They were young, enthusiastic and driven to succeed, eventually increasing their landholding to its current total of 105,000ha, majority of which is situated in the Hay Plains of New South Wales, with 5700ha of it located at Wagga Wagga.

“When I left school I did a lot of sheep husbandry around the place and got a feel for what makes a good Merino,” Ian said.

“The bottom line was, we wanted to run a profitable Merino operation, so we took some big risks to do that.

“We bought and sold a lot of country, grew rice, traded water licences and expanded into predominantly pastoral areas.

“There’s no exact science to breeding top quality wool on sheep, but everyone seems to be looking for a computer program to find the perfect formula.

“You need to physically look at, touch and closely study thousands of sheep and ask the question, what is a productive sheep?

“There’s a lot of knowledge and skills disappearing from the wool industry along with our older generation of sheep farmers, and we really need to tap into that before all of that knowledge is lost.

“I have been very fortunate to learn a lot of what I know about sheep from the older generation.”

So much so, that when Ian purchased a retiring Bob Simpson’s sheep back in 2001, the two like-minded producers realised they shared the same vision of a productive and profitable Merino, and Mr Simpson has classed the Banyandah flock ever since.

When asked about the intricacies of his Merino operation, Ian said he keeps it very simple, only handling his flock of 30,000 Merino ewes at Banyandah three times a year, and running to a strict annual schedule.

He has a similar approach to the additional 14,000 Merino ewes residing at the Wagga Wagga property, consisting of 5-year-olds and overflow younger ewes that are joined to Poll Dorset rams.

Ian’s golden rule is to run his sheep program to a precise calendar, kicking off between Christmas and New Years’ Eve, when his rams are joined with the ewes for a 14 week mating period.

The longer than usual joining works within this system, as the Shippens pregnancy scan the ewes in April, while simultaneously removing the rams.

Those ewes that scanned empty are then pregnancy tested six weeks later, and Ian said around 50pc of those late joiners scan pregnant.

When the later lambs arrive, they are weaned quite early and sent to the Wagga Wagga property to grow out, in an effort to let the mothers recover and fall back into line with the main ewe mobs for the next joining.

Rams are bred on-farm as part of the Shippen’s Merino stud, which consists of 3500 ewes from around six different families, with fresh bloodlines arriving annually after Ian purchases three or four new sires.

Those April scanned ewes achieve between 90-95 per cent conception rate, and of those scanned ewes, their lambing percentage consistently reaches between 120-125pc.
During the last week of July, the second big sheep husbandry event on the Shippen’s calendar occurs when the ewes and lambs are brought into the yards to undertake several jobs, all at the one time.

The third and final event occurs in the third week of October, when the gigantic task of shearing 55,000 grown sheep, 40,000 lambs across all of Ian and Camilla’s operations gets underway.

The scale of the event does not intimidate Ian, a true wool enthusiast, who revels in watching his 21 micron wool clip be shorn and packed into more than 2600 bales.

“Wool is very important to our operation and making our numbers work,” Ian said.

“I’m very passionate about wool; you really can have a profitable dual-purpose animal, and that is the Merino sheep.

“First and foremost, when we select our breeding stock, we look for size and staple length.

“I love big back ends on sheep, because it gives you another kilo or so of wool without compromising fertility, and that is the key.

“What fertility and wool cut comes down to is keeping your ewes in good condition, and that means feeding them in February on the assumption that autumn is going to fail.

“We budget on spending $5 a year per ewe on feed, just to be prepared for the lulls.

“That’s also why lambing percentage has never been an issue for us, we’ve always worked on being proactive rather that reactive when it comes to feed supply and ewe condition.”

Ewes in good condition inherently produce more healthy lambs, but also plenty of top quality wool, so when Ian talks about wool characteristics, he looks for a big, bold crimping, free-growing fleece with plenty of lustre.

With majority of their operation centred in pastoral country, the Shippens tend to understock their land, primarily suited to livestock rather than cropping.

However, to maintain the delicate synergy that exists between the natural pastoral landscape of perennial grasses and livestock, the family have sewn over one million saltbush plants to restore health to the soil and provide an alternative feed source.

As for any future plans, Ian said their large-scale Merino operation suits their pastoral area perfectly and they won’t be making drastic changes any time soon.

“I would dearly love to run a wether operation, purely to indulge myself and grow more wool,” Ian said.

“But I still think a self-replacing Merino flock is the most profitable operation for us, than any other breed mix.

“In the pastoral zone, we look at the production per unit, not per hectare, as in the higher rainfall areas, because we have to take care of our country.

“The land is too fragile, so we have to breed the most productive unit we can, rather than looking at things like DSE per hectare.

“At the end of the day, we set out to breed good sheep with plenty of wool, good fertility and keep it very simple, just perhaps on a larger scale than most.”

This case study is part of the Breed More Merino Ewes campaign, demonstrating the unrivalled performance of the Australian Merino. To read other case studies or to find out more information, go to www.merinos.com.au.