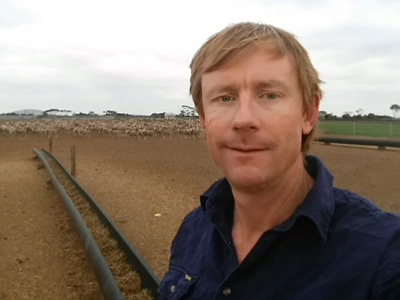 Why Merinos? My top 3 reasons

1. Wool cut is critical – the dual income of both wool and meat is the main reason we have always run Merinos.

2. Suited to our environment – dry summers, can be mated almost any time of the year, very ver-satile.

3. Ease of management – Merinos are perfectly suited to our farming system as a whole and are an important part of the rotation.

IN an area typically known for its big croppers, discovering the Fowler family’s 25,000 head Merino ewe flock near Condingup, 90 kilometres east of Esperance, Western Australia, is somewhat of an anomaly.

On top of that, the last five seasons have seen this Merino flock clearly out-perform the Fowler’s 19,000 hectare cropping enterprise, producing an average livestock operating profit of $210 a hec-tare, something co-owner Simon Fowler is particularly proud of.

The Fowler family are a force to be reckoned with in an era where big corporate businesses are slowly nudging out family-owned and operated farming systems.

Generations of Fowlers have been farming in the Esperance region since 1969 and now Richard Fowler and his three sons Simon, Andrew and Tim are more determined than ever to keep their 28,000ha of owned and leased land thriving.

A huge part of their path to profitability has always been their Merino operation, a mainstay of their family farming system and one that has remained an integral part of their cropping, pasture and livestock operation.

Simon runs the livestock side of the business while his brothers coordinate the cropping, and he said they are currently operating at a stocking rate of between 12-14 Dry Sheep Equivalent (DSE) and a total of 25,000 Merino ewes, in addition to 2500 Angus breeders.

He attributes their profitable performance of the last two years to their high stocking rate in a gen-erally 8 DSE area, their 9000ha pasture rotation and a strong, steady Merino industry.

“We’ve been steadily averaging over $100 for a lamb for a few years now, which has been im-portant to our business and also to maintain positivity in the sheep industry,” Simon said.

“So not only have the prices been good, but our sheep have also out-performed our cropping due to a high stocking rate and high performance pastures.

“We like to finish all of our livestock ready for market, so our livestock graze cereal and canola crops, in addition to our high performance pasture paddocks.

“Our stocking rate means we need to maintain good quality pastures and maximise the value of everything we have.

“We’ve always run a huge amount of sheep, there’s a lot of synergy between livestock and crop-ping, they work in such a way that one benefits the other.”

In addition to a solid frame and carcass structure for meat production, top quality wool is a driving force behind the large number of Merino ewes the Fowlers maintain, with the dual purpose nature of the breed ensuring two reliable incomes at crucial times of the year.

All of these elements culminate in representing precisely the type of Merino operation required to maintain and boost Australia’s ewe flock, the primary focus of the Australian Association of Stud Merino Breeder’s (AASMB) latest Breed More Merino Ewes campaign.

The campaign aims to highlight the exceptional profitability and performance of the Merino across three key areas – best natural fibre, great tasting meat and the most profitable breed – in order to encourage producers to increase their ewe numbers.

It is those three specific components of wool, meat and dual-purpose profit that will ensure the Fowler family will continue to run such large numbers of Merino ewes far into the future.

They shear close to 40,000 animals every year and spread their shearing period over the three months of spring, producing fleeces throughout September, October and November with a 21 mi-cron average and an average of 5kg greasy fleece weight.

For the past 15 years, the Merino ewes that did not meet the required carcass criteria or produce plenty of white, bright, free-growing wool are culled from the primary breeding flock and are used as ideal mothers for breeding prime lambs.

They are joined to White Suffolk rams which allows the Fowler’s to maintain a total Merino ewe flock of 25,000, capitalising on the Merino’s excellent mothering ability when joined to other breeds, while continuing to receive a wool income.

Both the White Suffolk and Merino rams are joined to the ewes for 42 days, the White Suffolks in mid-October followed by the Merinos in mid-December, spreading the selling period of their lambs over a number of months.

In doing this, the Fowlers capitalise on early season premiums for their 8000 F1 White Suffolk-Merino lambs in July and August, followed by supplying the local market with 15,000 perfectly fin-ished, 22kg cwt Merino wether lambs turned off from their on-farm feedlot.

While Simon admits he would like to improve their 95 per cent lambing rate, he is confident his ge-netics are heading in the right direction.

“We are focusing on purchasing the right kind of genetics, as well as pregnancy testing, to lift our lambing percentages,” he said.

“I think the direction Merino breeders have taken in recent years means we have some great ge-netics coming through, with larger, plainer carcasses and types of wool the industry wants.

“Our sheep have always provided us with an ideal enterprise mix and we won’t meddle with that too much.”

This case study is part of the BBME campaign, demonstrating the unrivalled performance of the Australian Merino.