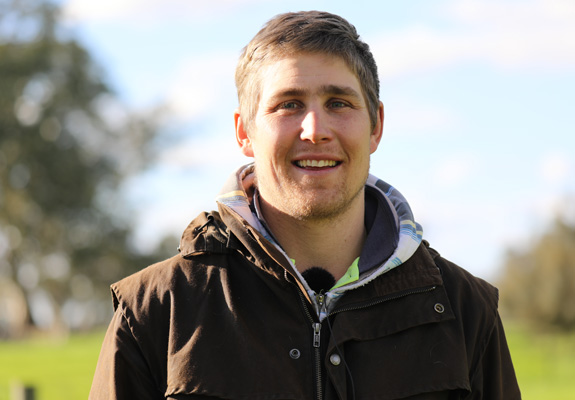 THE ‘modern Merino’ is far from just a buzzword for Mooralla producer Ricky Luhrs, it’s the key to a profitable business.

Overhauling their Merino genetics to focus on breeding the right balance of fat, muscle and carcase is just one of many aims for the Luhr family.

Ricky’s parents, Russell and Davina, are also still involved in the business.

The main focus of the operation is sheep, which involves 5000 Merino ewes run in a 60 per cent Merino-Merino flock and 40pc Merino-terminal sire flock.

They also crop 150ha for fodder.

Confinement feeding is part of the annual routine at Yama, with ewes penned for an average minimum of four months annually until the season breaks.

“It’s easier to manipulate condition score and by joining in the pens and using teasers we’ve increased our joining percentages,” Ricky said.

“About eight weeks out from lambing I realised we weren’t going to have grass, the ewes were all in containment and we fed them 2ME/day (metabolisable energy) extra for those eight weeks to put a bit of a haystack on their back.

“We started letting them out seven days before lambing and ran them in small paddocks to minimise activity and used their condition score to have the lamb.

“We were prepared for a tough year, we utilised temporary fencing to create small paddocks ready for them to lamb on nothing, yet we had our highest marking percentage ever.”

Ricky said they joined in January at a rate of 1-70 for a June/July lambing, weaning an average of 105pc from ewes joined.

He said they have also had success joining their Merino lambs at 14 months old and this year, their twin bearing ewes were only stocked on 700kg DM/ha FOO and still marking 140-145pc.

“That was impressive considering none of them saw green grass until after marking,” he said.

Lambs are weaned at 10-14 weeks of age, which fits their heavy rotation, and at marking the lambs receive a 6 in 1 vaccine, drench and worm egg count monitor for the Merino lambs.

“But season-depending I don’t really have target market weights. Depending on how much supplement feed we have in the bank to get the ewes around for the next year predicts how long I keep the lambs for.”

Ricky describes the Merino wether lambs as his “flexibility in the system”, in a good season they hold them to get a fleece prior to selling and in a tough season, they are sold as lambs.

Current sheep numbers are 1000 head less than usual, after the Merino wethers were sold due to seasonal pressures.

Benchmarking is a valuable tool for the Luhrs, but Ricky prefers to benchmark within their own business, rather than a wider database.

Data collection is aided by a full electronic identification system used across the flock, with lambs weighed at weaning/marking and each animal scored from 1-10 using Ricky’s twin/single algorithm.

“It’s a hard business to benchmark but I feel if you do it every year in our own system, that gives you the results you need,” he said.

“You have your own set of key performance indicators (KPI) and then you work towards that, I don’t break it down per hectare, but rather run it as a whole flock basis because that’s what works for us.

“I run different software and tools and am a big believer in breeding values (ASBVS), but I also keep a pen and paper diary.”

The Luhrs are in their first cycle of shearing three times in two years, generally in April and December of one year and then the following October.

They’ve produced an annual clip of 150 bales at an average of 18.5 micron but going forward, the size of the clip is likely to change as the system develops and they restock.

Wool from their cease-mulesing flock is sold through a contract with ZQ Merino, with the rest of the clip usually marketed soon after shearing.

Conservatively, Ricky said the ewes cut an average of 5.2kg per head annually, yielding above 74pc, with staple strength above 38Nkt.

“We’re focusing on holding our micron, but once we’ve classed all the ewe weaners then we fleece weigh, factoring in other relevant points,” he said.

“I love wool, but I see it as a covering cost and an opportunity cost, while protein is where the consistent money is made so we focus on lambing percentages and growth rates as the main profit drivers.

“It’s a balancing act getting both right.”

They produce 1000t of pit silage each year, buffered by grain, hay or straw depending on ME requirements and run an intensive pasture sowing system, incorporating new perennials.

After a tough season, Ricky said a snapshot of the last 12 months did not look great, but the fact they had retained their breeders and achieved a good lambing percentage put them in a solid position for next year.

“It was well worth spending the extra on feed,” he said.

“This was the first time in 10 years that we’ve run out of all supplementary feed on the farm, but I like to have enough equity to push us through those tough years.

“Over the next few years, we will run conservative ewe numbers but get better lambing percentages and try and build that fodder reserve back up again.

“Our country is light and grass can turn quickly, the Merinos are good to manage during those tough times and are a lot lighter on the soils.

“They outperform Dohnes that we have run in the past, we can run more of them and get more kilograms of lamb per hectare.

“So next year we plan on breeding an extra 800-1000 Merino ewes and less terminals, to get more ewes out to the industry.

“My aim then is to have a 100pc Merino flock in the next five years, they are more profitable and flexible.”