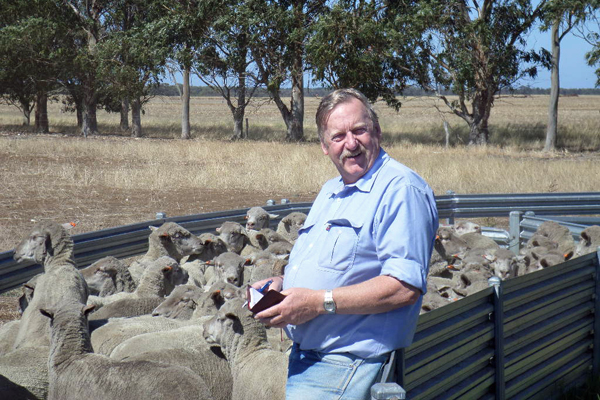 1. Constitution is well-suited to our environment

2. Profitability and ease of management

LOOKING back over his 37 years of farming, Rod Taylor can recall a time when wool prices were just $2.40/kg.

Such memories make it all the sweeter now his clip averages $15/kg plus, and when you’re running 51,000 Merinos, it’s a rather comfortable position to be in.
Rod is the farm manager at Epasco Farms, which spans across 14,800 hectares at Condginup, Western Australia.

The livestock-focused enterprise is owned by a family from Germany, but Rod has been the manager for 37 years and treats it as his own, with obvious passion.

“The property was purchased in May 1980, with not one cent of working capital – so everything on the farm is self-generated and no money ever leaves or comes into Australia for the business,” Rod said.

“I’ve got full responsibility for the investment, the owners visit at least once every 12 months and we do total business reviews but after that, it’s pretty much my baby to look after.”

With the excess funds the business has made over the years, Rod purchased three neighbouring farms in order to develop the enterprise.

When he began managing Epasco, they ran 800 Angus cattle including an Angus stud, 19,000 Merino sheep, and faced an extensive land clearing program.

This involved 75pc of the property being cleared and 25pc left as virgin bush and shelter belts, with significant investments made to reclaim creek lines and rehabilitate salt-affected areas.

Of their cropping program, 1000ha is allocated to a share farmer to produce canola and wheat and the remaining 1500ha is used for 500ha of fodder and 1000ha of wheat or barley.

“We’ve been buying these sires for about seven years now and we like them because they have very modern genetics, as well as being suited to our environment,” Rod said.

“Their wool is very stylish – plenty of crimp and length, nice and bright, white with a good cut per head.

“The rams are a good size, with a nice barrel and that suits our wether production program.”

Currently that program sees the wethers shorn every eight months, with the flock run for two years, with the aim of getting three wool clips before they are sold predominately to the live export market.

Mating 20,000 Merino ewes annually, they produce a wether flock of about 14,500 head, including lambs, of which 5500 wethers will be marketed for live export in June/July.

Rod said all ewes and wethers were classed according to wool quality, body size, constitution and confirmation to ensure consistency.

Mating starts in early December for a May/June lambing period, with the rams joined at 2.5pc for a period of seven to eight weeks, topped up another half a percent every two weeks.

“The ewes get their summer drench prior to mating and are put out onto clean stubble or pastures, with the maidens also getting a Campylobacter vaccine for their first lambing.

“Prior to lambing, all the ewes are vaccinated and drenched, through crutching time in April.”

The older ewes are pregnancy scanned and any dries culled depending on numbers, and the maiden ewes also scanned with any dries sold, to avoid carrying unproductive stock. Conditions at Epasco can be both exceptional and challenging and the seasons can vary greatly, something Rod believes is a testament to the adaptability of the Merino breed.

“Our environmental factors can upset any enterprise, because we can get three seasons in one day and nine seasons in a month, but for all the changes we do get, the Merino stands up very well,” he said.

“They are a very versatile animal that can do the tough times and the soft times.”

While they strive for meat/wool balance in their sheep production, Rod said wool quality was a big priority for them.

A few years back he attended an Elders grower tour to China, to gain an insight into why the country’s appetite for Australian Merino wool was so strong and if that demand was sustainable.

“I came back feeling very positive, so I started building our numbers up and we’re now running at true maximum,” he said.

“We’ve been reseeding modern pastures and clovers, perennials and legumes and this has allowed us to increase our stocking rate.

“Nutrition plays a vital role in our best practice approach.”

When Rod runs the figures it’s easy to see why there’s such a focus on wool production, especially with yields of 73pc and the current buoyant market.

Last year’s clip was a record high for the business, at 1245 bales.

The main shearing at Epasco is done in spring, with crutching and shearing of lambs in April, followed by the final shearing of adult wethers prior to them being sold.

The hoggets are classed in August and shorn in September, as Rod said he considered hogget wool to be the “perfect wool”, so they wanted to get it baled as soon as possible.

With the sheer size of the wool clip, when it comes to marketing Rod spreads it out over two-three months, usually placing a few hundred fleece bales in each sale depending on the market.

“I have done it over the last two years and I think it’s a good strategy that should be considered more with the volatility of the wool market.”

Looking forward, Rod said the increased uncertainly surrounding the live export industry had made them rethink their reliance on the market.

He said that may mean they shifted their strategy to instead produce Merino lambs for the lamb market.

“We’ve also sold our ewe hoggets into Victoria for five years or more and they have either gone into fat lamb production or to another Merino breeder, so they’re getting a name for themselves,” he said.

“We know we have other options, but even still I just hope everyone wakes up on how extremely important the live export industry is for Australia.

“Maintaining the quality of our wool is priority, because even now the balance from live export is going into wool production, so our focus going forward will be about maintaining and increasing the wool quality.”