Success Stories - How Merinos Can Improve Your Bottom Line

Merinos … the most versatile breed for all environments

Read the Case studies at the end of this page from a variety of producers from across the country.

In an evolving agricultural environment that often demands multiple income streams, research and field trials show the modern Merino is the leading breed when it comes to producing a variety of options across a range of markets and production systems.

In all states of Australia and in all environments, Merinos are proving more profitable results compared to other sheep breeds.

Through genetic advancement within the industry, Merinos are now strong competitors against terminal breeds, continually producing better lambing percentages and an improved ability to raise lambs with accelerated growth rates.

Because of the dramatic genetic improvement, the Merino wether has also become the ‘unlikely hero’ in sheep enterprises, now receiving some of the hottest competition at saleyards across the country.

With a lot more emphasis on body structure, size and quicker growth rates, wethers are now turned off at a much younger age than traditionally seen, being sold at six-months

By having this option to turn Merinos off at a much earlier age, they create the opportunity of a steadier income stream.

The ‘Breed More Merino Ewes’ campaign successfully highlights what Merinos are achieving not only as a sheep that produces the world’s most natural, sustainable fibre and great tasting protein, but a breed that can produce outstanding financial returns.

The word most used in the most recent case studies when producers are asked ‘“why Merino?” is versatility.

Read more below about what Merinos are doing for enterprises across Australia…….

A recent overhaul of their Merino flock to produce an article with the right balance of fat, muscle and carcase Merino producer Ricky Luhrs believes protein is where the consistent money is made, while wool is viewed as an opportunity cost.

“They outperform Dohnes that we have run in the past, we can run more of them and get more kilograms of lambs per hectare,” he said.

He describes the Merino wether lamb as his “flexibility in the system”.  In a good season he holds them to get a fleece prior to selling and in a tough season, they are sold as lambs.

MOST PROFITABLE BREED ALONGSIDE CROPPING ENTERPRISE

Unlike many of his neighbours who have opted for full cropping programs over the years, South Australian farmer Greg Hayes has never wavered from Merinos which fit perfectly into his production system.

He knows Merios will produce a premium wool clip as well as presenting a truly ‘dual-purpose’ animal.

WAGIN (WA) farmer Andrew Scanlon doesn’t mince his words, farming is his business and he runs Merinos because they are the most profitable breed.

“I’m not here for lifestyle reasons, I’m here to earn a quid so it comes down to functionality and what earns the most money,” Andrew said.

“I’ve not seen any WA benchmarking information that says anything beats a Merino.

He wants to inspire the next generation to become involved in such a promising industry.

“I have some clients that are focused on benchmarking their various operations and the advice they are getting is to reduce breeding cow numbers, increase breeding ewes and where the country allows, run a wether flock,” Mr Clavert said.

THE HARDINESS OF A MERINO

For David and Debbie Mullins in Manildra, New South Wales, the hardiness and the versatility of the Merino has got them through the tough seasons.

“Merinos will always play a major part in our farm business; I don’t believe any other breed could do as well as they do out here.”

Around Muckadilla, in the Maranoa region, Queensland, the Hacker name is synonymous with breeding Merinos, as Jon’s father Tom and brother Peter Hacker run a family Merino stud. Read More

The West Australian Wheatbelt sheep producer has spent nearly six decades gathering an enviable depth and breadth of knowledge of the Merino sheep, seeing it evolve into the highly productive sheep it is today. Read More

THE Merino is the most versatile breed in the world, according to Victorian farmer Kieran Flood, and it’s never been more prominent than the past 18 months. Read More

THE year 2020 has thrown up many challenges for farmers - fire, drought, floods, a pandemic, but with adversity comes opportunity and this year there have been plenty of the latter for Merino producers. The challenging year has highlighted the resilience of the breed with meat markets solid throughout and the wool market now rebounding well. Read More

IT is a fine balance trying to increase wool cut and maintain a superfine fleece, but Tasmanian producers Josie and Henry Dunbabin believe it is a worthwhile pursuit to maximise profit. Read More

AS a self-confessed numbers man, Redhill farmer Greg Hayes knows full-well that Merinos are the most profitable breed for his sheep and cropping enterprise. Read More

STAWELL producer Scott Nicholson likes to control as many variables as possible to maximise profitability in his livestock operation. Read More

BETWEEN dogs and drought, sheep numbers really took a hit at Weewondilla, north of Longreach, Queensland. Things are now starting to turn around for the Webb family as they rebuild their Merino operation. Read More

THE modern Merino is far from just a buzzword for Mooralla producer Ricky Luhrs, it’s the key to a profitable business.

Overhauling their Merino genetics to focus on breeding the right balance of fat, muscle and carcase is just one of many aims for the Luhr family. Read More

WAGIN farmer Andrew Scanlon doesn’t mince his words, farming is his business and he runs Merinos because they are the most profitable breed. Read More

IT has been a tough few seasons for Manildra sheep producers David and Debbie Mullins, but if one thing has shone through, it’s the hardiness of the Merino.

WHEN weighing up the option of having one income stream versus two, it just makes good business sense to go with the latter.

That is just one of many reasons why livestock consultant Andrew Calvert is passionate about Merinos - the true dual-purpose nature of the breed. Read More

A BACKGROUND in shearing has made third generation Charra farmer Craig Wright quite particular about his wool quality. Low rainfall and short seasons are just two of the challenges faced by the Wrights on their coastal property, but after four generations of farming they have come to know what works. Read More

MERINOS have always been a profitable option for Evan Wyatt, which is exactly why he and his family have chosen to stick with the breed in their livestock and cropping enterprise. Read More

WHEN Mike Pratt looks at his Merinos, all he can see is growth. Growth of flock numbers, growth in genetic advances, physical growth of meat and wool, growth in his local community and growth of the entire Merino industry across Queensland and Australia. Read More

LOOKING back over his 37 years of farming, Rod Taylor can recall a time when wool prices were just $2.40/kg. Such memories make it all the sweeter now his clip averages $15/kg plus, and when you’re running 51,000 Merinos, it’s a rather comfortable position to be in. Read More

WHEN the figures started stacking up, Tasmanian farmer Rob O’Connor figured it was time to breed more Merino ewes. Six years ago, after extensive analysis of his mixed sheep enterprise, Rob decided to sideline his crossbreeding program and shift his focus back to refining his Merino genetics and boosting his flock numbers. Read More

DEAN Wheaton didn’t think his Merinos could perform any better than the 2017 season. Then along came 2018. Wool prices increased by 30 per cent, sheep values continued to climb and his lambing rates were also heading higher, making for a perfect storm of Merino magic. Read More

WESTERN Queensland grazier Ben Banks has long known the value of a Merino ewe. So much so, that even throughout the last 20 years of unpredictable and extreme weather patterns of northern Australia, Ben and his family have done everything within their power to hold onto their core breeding ewes. Read More 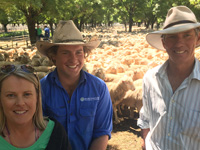 WHEN Moulamein farmer Ian Shippen drifts off to sleep each night, he rests easy, knowing his sheep will have grown him seven more bales of wool by the morning. Read More 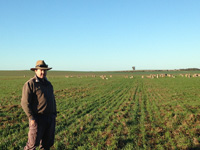 MERINOS are a vital part of the enterprise mix at Craig and Abigail Hickman’s Curramulka property Seaview, on the Yorke Peninsula, South Australia, producing $130 per winter grazed hectare per 100mm of growing season rainfall in 2016.  Read More 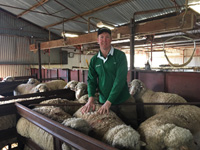 Merinos offer farmers a profitable option with the ability to produce a gross margin of up to $60 per dry sheep equivalent for self-replacing Merino flocks in the cereal zone according to 2016-17 Sheep’s Back Benchmarking Program figures, says Landmark Animal Production Specialist Daniel Schuppan.  Read More 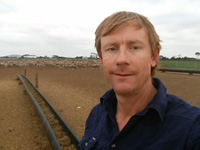 The Fowler family are a force to be reckoned with in an era where big corporate businesses are slowly nudging out family-owned and operated farming systems. Read More 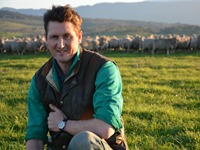 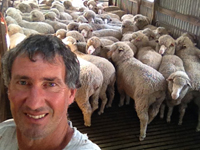 Merino profitability on my farm is driven by three key factors – stocking rate, bodyweight and fleeceweight. While these key factors vary year‐on‐year, I’ve seen a steady improvement in all of them since I’ve been benchmarking. This takes the guess work out of measuring profitability and you can get a clearer picture of where you’re going season to season.”  Read More 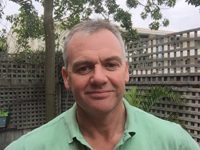 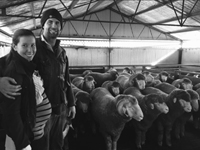 “Merinos have the wool cut, the wool quality and they are the backbone of the first‐cross ewe industry. For the amount you can run per acre they are a very profitable article. They have a genuine profitability. One semi‐load of wool is the equivalent of 40 loads of barley in the current market.” 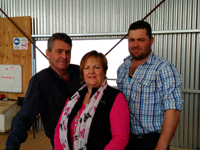 “I’ve done the calculations and Merinos come out on top. I’m switching back for ease of management, it’s much simpler and more efficient to run a single breed enterprise. I feel the Merino lambs will more than fill the requirements previously filled by the crossbred lambs.”  Read More

Contact AASMB to talk to one of our experts >>