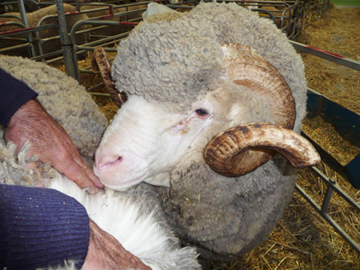 As the peak body for stud Merino breeders in Australia, the Australian Association of Stud Merino Breeders (AASMB) has a major charter to foster unity and advance the breeding of superior stud Merinos.

To this effect, the AASMB is providing a definition and descriptive standards to broadly encompass the aspirations of all stud Merino breeders in Australia.  Under this system, studs emphasising purity of breeding have a flock status that caters to their needs.

For studs using out-crossing to enhance the breed, a status exists that has no restrictions on compatible introductions and breed crosses, as long as progeny selected as stud animals conform to a satisfactory level of standards.

The Australian Merino is a wool breed of sheep with meat capabilities.

It is of Ovine species, horned or polled, with long, crimpy, white wool, developed in Australia from many types of Merinos and other sheep, and exhibiting variable degrees of meat carcase attributes.

Australian Stud Merinos are those sheep retained for breeding purposes, principally breeding rams for sale.  Australian Stud Merinos are also those that are eligible for registration in the AASMB Flock Register.  To be eligible, flocks need to comply with one of the flock status requirements, and flocks or individual sheep need to conform to an acceptable level of standards.

For flocks in Australia made up of pure Merinos or F4 minimum Merinos.

(i) For outcross flocks in Australia using F1, F2 or F3 compatible introductions, that conform to a satisfactory level of standards administered by the State Associations.

These categories can revert to Pure Status after some years of breeding towards the F4 composition, and presents the possibility of encompassing other compatible Merino breeds into the AASMB if the members so desire.

Instead of State Associations, as single bodies, conforming to Pure or Introduced Status, it is up to individual members of the various State Associations to specify on their Annual Returns which flock status they want to represent.  Disclosure of breed introductions in the Vendor’s and Purchaser’s Certificates will provide a transparent and accountable breed composition status for prospective clients.

To conform to the Australian Merino Standard, the following criteria need to be addressed.

These standards are presented as:

(i.) an aid for stud Merino Inspectors for registration purposes

(ii.) to differentiate the Australian Merino from other breeds of sheep.

In essence, it is the wool features of the Merino that sets it apart from other breeds. In particular, the Australian Merino is unique in possessing a luxuriant skin producing an exceptional number of fine secondary wool fibres.

b) Conformation and Structure

2. The Topline and Trunk

This is a matter of choice, depending on the trueness of type of the different basic strains (Fine, Medium or Strong), and the end use, whether wool only or wool plus meat. Regardless, the covering should be sufficient to support the notion that the Australian Merino is essentially a wool breed.  Extreme stripping of wool from the head, bellies and legs should be avoided.